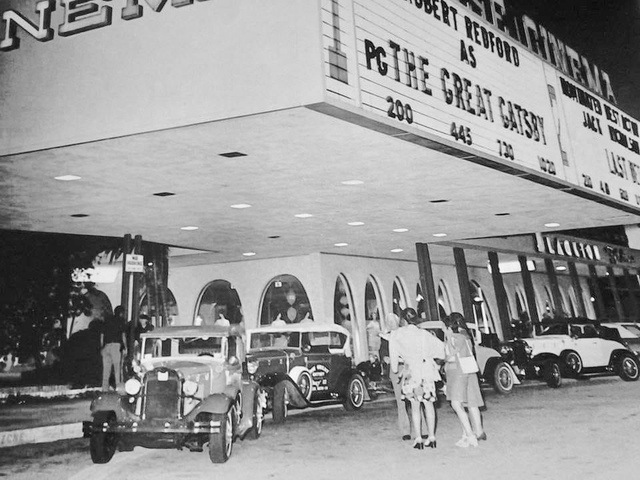 We lived in Fort Lauderdale during the 1960s and I’ve been trying to find the twin that I always remembered as the “Sunrise Cinemas”. I guess I’ve found it, but I admit to some confusion. It’s described here as originally being a back-to-back, and, oddly enough, I’d remembered it as a side-to-side layout, with the seats of both theaters facing north.

The theaters I remember, which were indeed new in the mid-1960s, were of a very clean, modern design with no curtains or other traditional details, and the screens themselves were set back, framed within bevelled walls that were painted light like the screen. In my mind’s eye, those were lit by a soft blue light before and after films. It was spare and modern, but attractive and comfortable.

I’m probably not describing this well, and of course the memories are 45 years old, so I will very much appreciate it if anyone can confirm or correct any of this.

I’ll be very grateful for any help on this. Show me where I’m right and where I’m wrong. Thanks!

Sunrise Bl. runs east to west and the Sunrise/Galleria Cinema and shopping center was on the south side of the boulevard. The marquee and entrance faced north, the larger theatre, Cinema I, the screen wall faced the Intercoastal, east and the screen wall of Cinema II was right on NE 26th Ave.

Thanks. I have no idea why I thought the layout was different. I visited Fort Lauderdale in 2000 and when I drove by there I had no sense whatever, even from outside, that this was the place I remembered.

I’m looking at a straight-down view on Bing Maps, which must be a few years old because the buildings are still there. (Unfortunately, the bird’s eye views are up to date.) There are two slightly fan-shaped movie auditoriums, with two other buildings in front of them, with what might be an open walkway between them. Was that retail space, or did they add more theaters at one point? What are we actually seeing here?

ChasSmith;
You are correct, in your recollection regarding the original theatres' shadowbox screen surrounds at the Sunrise Cinemas. Both of the original houses had plywood surrounds, painted white, which were lit by concealed theatrical striplights with “General Cinema Blue” roundels (lenses) in them. We made a lot of extra income from changing those bulbs on maintenance calls.
The Hollywood Cinema, having been operated by GCC for a long period of time, also had a shadowbox screen with blue striplights. The Hollywood Cinema is still standing, however it has been closed for many years.
The Pompano Cinema, originally a Loew’s House, got the GCC shadowbox treatment when GCC took over. The Pompano Cinema, still standing as The Cinema nightclub (although gutted) was later twinned by GCC and lost the huge screen. Susequently it was quad-plexed.
The Riviera Theatre, in South Miami, had a similar screen, and was equipped for 70 mm. Again, it lost out when “plexing” became the economic reality. The Westchester Cinema, likewise, as well as the Lauderhill Cinema, another former Loew’s.
In later years, GCC hung blue striplights above the screen only, such as was the case at the Broward Mall (4) Theatres. Now demolished. The Coral Square eightplex received blue lights as well. The most recent ones, such as The Fountains, in Plantation, got blue gelled leko’s, mounted outside the portholes, focussed on the screen. And then slide projectors came along, showing advertisements, and the need for the blue screens was over. Ironically, the biggest player in the slide show ad game was a subsidiary of AMC, the competition.
Bruce Hannover

The buildings in front of the auditoriums were stores. As I recall, the store with the arched windows on the west side of the marquee was some kind of high-end womens clothing store (in the early 1970s). The space btwn the auditoriums and the backs of the stores was alley-ways for the emergency exits out of the theatres, and delivery entrances for the stores. The theatre was sub-divided and always remained within its' original footprint. Originally, the marquee had tall red serif-style neon letters spelling SUNRISE CINEMA on the top edge, above the attraction board. On the E. & W. sides of the marquee were smaller red neon letters spelling just CINEMA. Somewhere along the line they were all removed and the name was incorporated into the attraction board. I don’t know if it was done when it changed to Galleria, or maybe a previous storm took them down while it was still Sunrise.

By the 80s and until the mid 90s, the “arched windows” retail space became a McDonalds (eat-in only, no place for a drive-thru). The space to the east was a long-shuttered bank, Financial Federal. Both were vacant for many years until demolition.

Bruce, the Pompano Cinema opened as a General Cinema house (or its predecessor, since they didn’t adopt the GCC name until the mid 60s). Loews' Broward screens were in Pembroke Pines, Lauderhill, Inverrary, and Coral Springs. I recently left some background at the Cinemas 4 Pompano page here at CT.

“GCC shadowbox” — nice description, I’ve been trying to think of the most precise term.

Great information, everyone. Appreciate it. I know it’s a long shot, but I hope to eventually find mid-60s photos of the place.

CinemaTour has a small photo as the Galleria.

This opened on December 19th, 1963. Grand opening ad in the photo section.