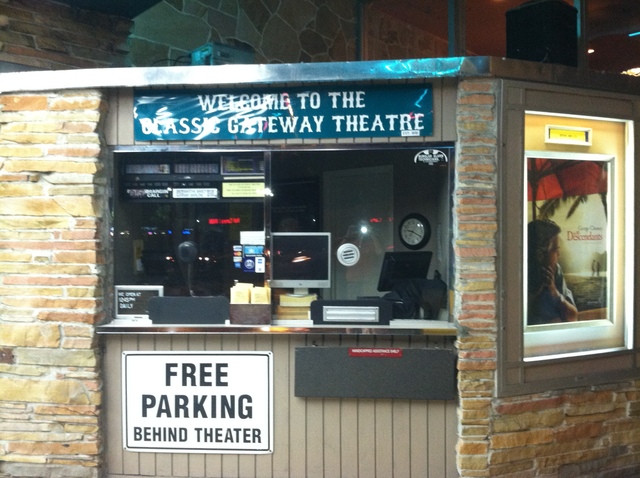 The Gateway Theatre opened March 24, 1951 with the world premiere of “Up Front” starring David Wayne. It was operated by Wometco Theatres as a single screen venue with 1,500 seats, all on a single floor. The theatre had its own 500-car paved parking lot. Sunrise Cinemas later operated the the theatre and has converted it to a fourplex.

It runs the latest in fine art, foreign and independent films. It is noted as one of Fort Lauderdale’s landmark theatres. Much of its original style has been preserved in the conversion to a fourplex.

Back in town for a few days so I am off to my favorite movie theater in Lauderdale to see a movie. Will give an update later.

I just uploaded 4 photos from last night. The theater is kept in reallynice shape by the new owners. One thing that hasn’t changed since I last was there in 05 is the screen in theater 3 isn’t wide enough for scope films. It still is off the screen on the right side.I am not sure what the problem is because you can see thwe screen is a great size.

I wasn’t impressed with the Gateway. Went to see Religulous. I was looking for a well-preserved example of a proper old-style theater, what I found was they took the big auditorium and split it into 2 or 3.. and very very badly. The seating is still curved. You can tell this was a 1000+ seat house. But now, the curved seating remains, but the screens are “flat” instead of the curved one the original must’ve had to conform to that seating curve. So what happens? On the left most auditorium, the seats don’t line up with the screen. You sit at an angle to it. I can only surmise the right-most auditorium is the same.

I won’t be back. The worse “plexing” job I’ve seen ever.

Is there no single-screen 700+ seat house left in this state?! One that hasn’t been hacked up to ‘keep up’ with the megaplexes (who are now themselves dying off?)

A photo of the original screen draperies of the Gateway Theatre can be seen at the top of this page of the September 1, 1951, issue of Boxoffice.

The 11/21/60 photo I just added was courtesy of Jeff Davies via the Historic Florida FB page. CT added the pic before I could finish the full description.

News footage from the “WHERE THE BOYS ARE” world premiere can be seen here.

This opened on March 24th, 1951. Grand opening ad in the photo section. Articles and picture at

The Fort Lauderdale Film Festival has signed a lease to reopen the Gateway post-lockdown, scheduled for Memorial Day weekend. Plans are to continue the blend of art and mainstream film bookings. Eventual renovations are planned.

So is this theater closed currently?