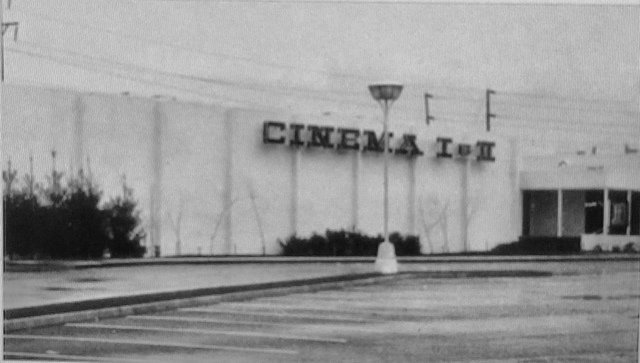 A two-screen, 1,500-seat cinema opened on November 6, 1968. It was later triplexed. It was demolished in the 1980’s and was replaced by an eight-screen AMC Renton Village Theater.

I worked at Renton Village Cinema I & II 1972-1975. The sunken screen effect was due to a structure called a “shadow box”, which was white and had to be continully repainted because kids loved to climb on it. Because it eliminated black masking, there were no sharp edges on a picture, which looked bad. It also reflected white light back to the screen which tended to wash out deep black in a scene. It also eliminated curtains and motors, making it another General Cinema Corporation cheap innovation. During intermissions, the screen and shadow box were bright blue from sixty 150 watt lamps with blue filters mounted above the first row – I know because I changed them out on a borrowed scaffold – and calculates out to a ridiculous waste of power. I always heard their theaters in Boston were much nicer.

While I was working at Renton Cinema, 1974-1976, Charles Osgood was the manager. I remember popping corn back in Cinema II, we got to be good at it and quick! “The Way We Were” played for many months. I remember when “Earthquake” came out. Those huge woofers actually moved the building so much, that I remember seeing cracks in the plaster. I think DavyDuck would know if there was any real damage done to the structure. I think I remember working with DavyDuck and possibly working with him at Overlake Cinema.

I can’t believe they ever played “EARTHQUAKE” at a twin theatre,but have read several places they did with sensurrond.Must have ruined the other movie.

Dave, I worked with you at Overlake!
When we would show the previews for Earthquake (and later regular showings) it rumbled throughout the building. The first time we showed the preview, people in the lobby actually thought one was happening!

I don’t remember the trailers being in Sensurround we were running them i am pretty sure way before Universal had the speakers put in.They hired the doormen to unload and position the speakers in the Imperial.Universal told our theatre chain ABC THEATRES they would pay us $15.00 an hour good money now,Great money in 1974.We never saw a cent!You could be right because i sure have been proven wrong before on CT.

This building was demolished and replaced with:

Anymore have more info or photos?

Another disagreement with the opening date:
39. THE SEATTLE TIMES – October 26, 1989

8-SCREEN THEATER TO OPEN NOV. 17
RENTON Moviegoers hungering for another theater in this city have less than a month’s wait. An eight-screen facility will open Nov. 17 at the site of the old Renton Village triplex.General Cinema Theatres, which last year closed the triplex to make way for a larger facility, plans to open the Renton Village 8 to keep pace with the demand for a variety of movies. The complex, at South Grady Way and Interstate 405, will have two computerized box offices and seat up to..

This opened as a twin on November 6th, 1968. Grand opening ad posted here. It was the first for General Cinemas in the state.

THEATER WAS OPENED BY RALPH OSGOOD, I KNOW RALPH HE WAS THE SECOND MANAGER OF WESTGATE l & ll, BROCKTON, MA. I WAS REPLACE RALTH AT WESTGATE, SADLY RALPH HAD KIND OF A PROMISE FOR HE WAS A YOUNG STAR AT THE TIME HE END UP AS D.M. IN AREA, SO THE STORY IS, BUT G.C.C. THAT CHANGED WHEN COMPANY WAS LOOKING FOR A FMALE D.M. AND THAT WAS THAT SAD

Dennis: Was that female DM’s name Linda D. by any chance? I worked for GCC from 1980 – 1995 and Linda was the one who hired me. Her office was in a converted windowless former storeroom beneath the projection booth for Cinema II-III.