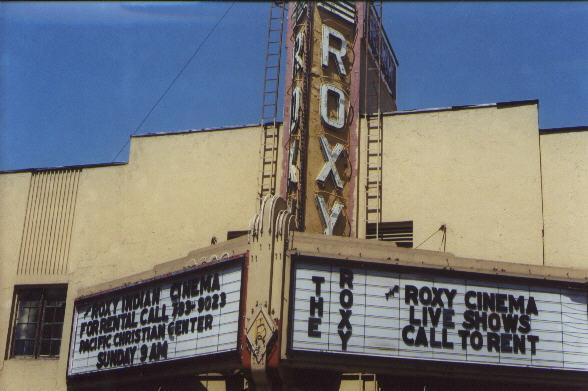 The Roxy Theatre opened in late-1936. In its later years it operated as an East Indian cinema until around 2001. The theatre was in serious need of repair and restoration work. It is now in use as a church named Kings Chapel.

I hope someone can save this theatre. About 20 years ago, I was part of the live-audience Rocky Horror Picture Show cast there on Friday and Saturday nights. (You know…the geeks that get up and act out the movie in front of the screen? Yeah, that was us.) It really is an amazing place; yes, in desperate need of repair, but with some of the original art-deco still in place. (I hope the attempt to turn it into a church didn’t destroy all of that.) It actually wouldn’t take much to turn it into a live theatre or general-purpose performance hall for the city of Renton – which, frankly, could use a little more old-school class in its buildings.

Chyna, you left no contact information. I’m working with the Renton Historical Society to mount an exhibit about the Roxy, complete with original fixtures and a replica of thne sign. If you can contact either them at 235 Mill Ave. S. or me at , help, photos, storied and details would be a great help. And from a Fey relative? Can’t get any better than that.

Update: October 2006
What was formerly the Renton Roxy, has been converted into a ‘for-rent’ hall, used primarily as a storefront church. When the building was last sold several years ago, the buyer did donate the vertical marquee to the city, but it’s unclear if it could ever be restored. The void was covered with sheets of oriented strand board and painted beige, along with the rest of the facade. All of the ornamental lighting was removed and the original ticket booth was quickly ripped out and thrown away (it could have been saved with the marquee), replaced by a landscape border brick planter with plastic plants in the same footprint. The Roxy was our local neighborhood theater and is sorely missed. Single screen theaters are rare as henâ€™s teeth these days and the Roxy struggled on far longer than anyone expected. Our alternatives in Renton are the eight screen Renton Cinemas about a mile away, and the East Valley 13, located in industrial South Renton. The City of Renton recently built a multimillion-dollar performing arts center as part of the renovation of Renton High School two blocks north of the Roxy. Adjacent to the old theater, the city has created an urban center over the past decade which includes an urban park, a multi-level parking structure, a large single floor building with a high bow-truss ceiling (formerly part of a car dealership) that was converted into a multi-use facility, and a bus transit center. The goal of city planners was to create a new heart in the old commercial downtown core. Throughout this development, historic structures have been demolished (very few remain in Renton), replaced by large apartment blocks and commercial structures, resulting in fundamental character changes to the neighborhood. The Roxy has avoided demolition, so far, but this result seems inevitable in an environment of small town politics, driven by greedy developers and sorely lacking intelligent planning or social responsibility.

The Roxy marquee was in terrible shape and was not saved, nor were the letters on the vertical section which were rusted badly. The man who converted the theatre threw all the neon tubes (which I had sorted and tested) into the trash. As you can see in the above photo, the vertical and upper horizontal sections are in place, but they removed the ladders up the sizes, presumably because they were for servicing the sign (they were secure, too – I climbed them constantly, and I weigh 200+) A stupid move, as they were the only safe way to the roof! Yes, there’s also a ladder inside the vertical for servicing the transformers and wiring, and it was secure enough when I worked there, but now…? The entire vertical is dryrotted plywood covered in metal screening which had been sprayed with concrete for surface, and at the top of the ladder is a cramped mechanical room which offers access onto the roof only for someone who wants to squeeze around a large duct.

Yes, the ticket booth is gone, but the Historical Society has the ticket machine, the peacock’s tail off the roof (it has been restored and is on display in the museum) some of the light fixtures (anything that wasn’t left intact is either with them or with me) the telephone from the projection booth, and the mechanical flasher from the peacock’s tail (that’ll be returning to me for restoration)

Amazingly, the current owner undid all Kurt’s (former owner) botched remodeling jobs – AND rewired the entire building, bringing wiring and plumbing up to code. If only someone coul;d buy it from the owner, also the pastor and a real estate guy, it could be restored. If you have any questions about the place, possible I can answer them, as I worked there doing restoration during the entire “Roxy Indian Cinema” time. My email is
~ Jonas Clark-Elliott

Chyna,
I am working on a book in which Seattle movie theaters play a significant part. If you have any pictures or stories on the Roxy, Renton, and Rainier between the years 1957-1961, I would be very appreciative. You can contact me through
Thank you….
Bill

“Fey’s Roxy is the name selected for the modern new theater now being completed at Renton, for Ben and Erwin Fey.”

The house must have opened before the end of 1936, but I haven’t found it mentioned in later issues of the magazine that year.

The building is in poor, but salvageable condition. It appears that that every effort was made to strip it of its original design in order to give it the appearance of a bland, multi-use facility. Pity. It seem to have adequate room and design to be used for live performance. Still it is drag to see it in such deplorable shape.

I grew up in this theater in the 90s my father was the owner I would love to see what it looks like now inside.

Chinapet, I hope you check this site. I’d be very interested in old pictures of the theatre. I am on the board of the Renton Civic Theatre. We are trying to do some building restorations, and want to perserve the histories of these great buildings. You can reach me at . Thanks!