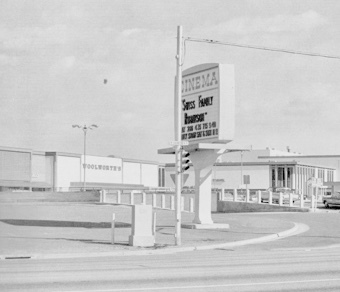 Opened as the Englewood Theatre in the Cinderella City Shopping Center. On November 14, 1965 it was renamed Cinderella City Cinema. It was twinned on June 25, 1975. It was demolished in 1979.

I need to amend the location – the Cinderella City Mall was in Engelwood, Colorado. The Cinema opened in 1968 and was demolished in 1979.

The theatre and the shopping center of which it was part was built on a landfill, a former garbage dump. It suffered from structural problems throughout its life due to the settling of the ground beneath it. I believe the entire shopping center has been demolished.

Back in the day, there were two major theaters around the Cinderella City mall area.

One was the set of theaters located at the Southwest end of the mall. These theaters were demolished in 1979 and later replaced with the May D&F building (which soon became Foleys) and which is now the only remaining mall building on the premises, reborn as the Englewood Library and offices.

The second set of theaters was the Cinderella Twin Drive-In theaters. These still stand only two blocks west of the old mall area, right across Santa Fe Avenue (US 85). The theaters are currently closed for the season, but no one thinks they’ll actually re-open next summer. Rumor is that a large construction firm bought the land and will demolish the drive-in and replace it with condominiums.

The theater was owned and operated by the General Cinema Corporation. As such, it used the company standard architecture (e.g., no curtain, curved walls that framed the screen, light blue and grey color scheme, perforated (acoustic)panels on the side walls, etc). The theater hosted the world premier of Walt Disney’s “Snowball Express” in 1972. The actors Dean Jones and Nancy Malone were in attendance at that premier.

I was Division MANAGER of this theater for General Cinema this was a 1200 seat single, in it day one of the best, specially on Disney films, so sad no photos showing it beauty back in the day

Did they ever show any film version of Cinderella here?

MANAGER THIS THEATER TWICE. WAS A GREAT PLACE TO SHOW KIDS SHOWS. THIS PICTURE DOES NOT DUE IT JUSTICE. IT WAS A BEAUTIFUL LOBBY WITH HIGH WINDOWS GIVING A SPECTACULAR VIEW OF THE ROCKY MOUNTAINS.

the cinderella originally opened as the englewood theatre, changing its name to cinderella 11/14/65. they became a twin cinema on 6/25/75. i’m currently writing a series of books on the history of the denver area drive-in and indoor theatres. if anyone has any questions about the subject, please feel free to get in touch and i’ll be happy to share my research with you. . see you at the movies ! – ken mitchell