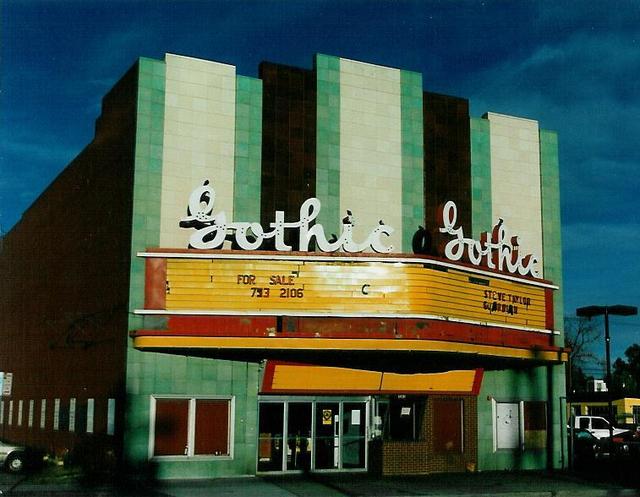 The Gothic Theatre was opened in 1920 in an Art Deco style seating 498. It was remodeled in 1940 with the front façade being completely redone but no changes to the interior.

In 1998 the theatre was saved from the wrecking ball and went through another renovation. It is now used for concerts and performances. The light and sound systems are state of the art after the last redo. They allow smoking in the wrap-around balcony and a nice size dance floor is now in place in front of the stage.

The front façade is done in a pillar effect with alternating colors of lime green, cream and burgundy. The large triangle-shaped marquee has been restored with large letTers spelling out “Gothic”. The exterior box office has been restored and is in use. The theatre has parking on all three sides.

The introduction to this page mentions a remodeling in 1940, but the April 30, 1949, issue of Boxoffice Magazine describes a major remodeling then underway at the house. This involved rebuilding the front, reconfiguring the entrance, moving the boxoffice, enlarging the rest rooms, expanding the balcony to accommodate an additional 150 seats, building new stairways, shifting the manager’s office to the main floor, enlarging the stage, reseating and completely redecorating the auditorium, and installing new heating and ventilation systems.

A later issue of Boxoffice refers to the theater as “…the New Gothic Theatre, now under construction at Englewood.” A third item says the estimated cost of the project was $100,000.

Given the scope of this rebuilding, it’s likely that just about everything about the Gothic that doesn’t date from the 1990s renovation dates from 1949.

Undulating walls with lighting coves were not a common feature of theaters built in 1920, but they were popular in the 1940s. In the small photo of the auditorium on the Gothic web site it looks to me more late art moderne than anything else.

Some alterations took place between those years. There’s a wider marquee in 1940, and the shops either side of the entrance have been closed up. That probably dates from the 1940 remodeling mentioned in the intro, but note that the entrance doorway still has the Gothic pointed arch top. The current facade is clearly a later alteration.

The facade in both of those photos has some really nice brick work, and the current facade covers that up, as in the photo dated ca.1950 (actually later since the 1957 “An Affair to Remember” is on the marquee.) The 1957 facade must be the result of the 1949 remodeling. I wonder how much of the brick remains underneath?

I’m not sure that the brick facade dates from 1920, though it might. I’d say the style was actually a modernized Gothic, with some Prairie Style influence. The style could be considered a precursor of Art Deco, but it wasn’t full-on Art Deco. If it did date from 1920, though, it was very advanced for its time.

That site also has pictures of the Englewood Theatre (ca.1929, as “On With the Show” was released that year) and the Pioneer Theatre (probably 1936, with “The Mysterious Avenger” on the marquee.)

The Gothic in 1995 – looking for a buyer:
View link
View link

I found these in old falily photos My dad managed the theater for many years I grew up in the projection booth Link Here http://www.flickr.com/photos/75481081@N02/6785995947/in/photostream/

HodgePodge – many many thanks for the photos – it’s nice to have pics of the theaters in their hayday. Can you tell us more about the attempted burglary and explosives?

The photos were dated December 1951. This was in the time frame my father managed the theater. From the way the story was told, someone knew that the closet in the office contained two floor safes embedded in concrete and contained the cash from that week sales. Dynamite was placed on top of the safes in order to gain access to them. However you could tell in the photographs that that attempt failed but did do a lot of destruction to the box office an office areas. The gentleman in the photograph is a Englewood detective which appears to be from a Dick Tracy era.

My father would take me to work with him on many occasions and I would stay in the projection booth and became a assistant of sorts. Many years later I worked at the theater changing the marquee letters. I also worked at the Ritz which was also known as the Jewell setting the marquee there.

My father later became the general manager for Atlas Theater Corporation and worked in the Denver office for Charlie Yeager. I think I have been to all of the theaters within the Atlas chain throughout the state on travels with my dad.

The Lamar Thaeter was the twin to the Gothic and the Gothic was rebuilt as the copy to the Lamar. The Lamar replaced the Pioneer but was built on a diffrent site. My father managed the Pioneer and opened the Lamar as its first manager.

This link has a 1959 photo with the Gothic Theatre in the background. Photo will enlarge on that page. Copy & paste to view.

I have uploaded a 1930 photo from the Englewood Library collection.