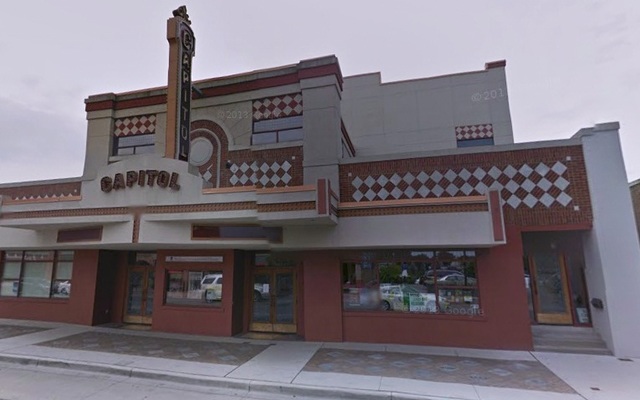 In 1927 Charles S. Hadley decided to build a theatre to host live entertainment in downtown Chatham. Construction began in 1929 by the Harris Theatre Company. In 1930, Famous Players Canadian Corp. Ltd. purchased the theatre before it was completed and turned it into a movie palace. It had 1,285 seats when it opened on April 11, 1930. It was one of the largest theatres in Southwestern Ontario and was often use to host movie premieres such as “Gone With The Wind”.

In 1975 a centre wall was erected and two cinema screens were installed with seating capacity of 472 on each side. In May 1993 the theatre closed its doors and later that year the City purchased the property with the intention of creating another downtown parking lot. In November 1994 the Chatham Capitol Theatre Coalition made a proposal to save the theatre and restore it as an entertainment venue.

In December 1996 the Chatham Capitol Theatre Association, a not-for-profit organization, purchased the property form the City and launched their fundraising campaign to restore/recontruct the theatre.

In the restoration process the theatre has been assisted by Human Resources and Skills Development Canada Job Creation Program grants. To date over 150 individuals have been trained in both construction and administrative duties and 80% have gone on to gainful employment in the community with these new skills.

When completed, the theatre will have 800 seats in the main auditorium and 400 in the balcony (new.) There will be an orchestra pit, a stage that is 77 feet wide by 40 feet deep with a fly tower over 60 feet high. Three lounges have been built and many other amenities to create the attractive, technologically advanced theatre to host international caliber performances of all entertainment types. All of the original decorative work has been preserved (in some manner) with many more decorative pieces created during the restoration of the theatre. Restoration was completed in 2014. Wednesday night is ‘Movie Night’.

This Theatre is Closed/Renovating/Restoring.
It is still offering Programming but in alternate locations throughout the community.

The architect for the Theatre is Theodore Jagmin.

The Capitol theatre has just received a seven million dollar grant and and expects the balance of work to be completed in about a year. I attended their open house a few weeks ago and was very impressed with everything that was done so far. They’ve done very costly things like adding a balcony, an elevator, and even a hydraulic orchestra pit. Unfortunately, it sound like the new Capitol venue will be strictly one for performing arts — too bad, it’d be a grand place to see a movie.

I did a google search, and found the Capitol Theatre web site. Enter: chathamcapitoltheatre.com and this will take you to their home page. There is a great shot of the auditorium and brief text about the history.