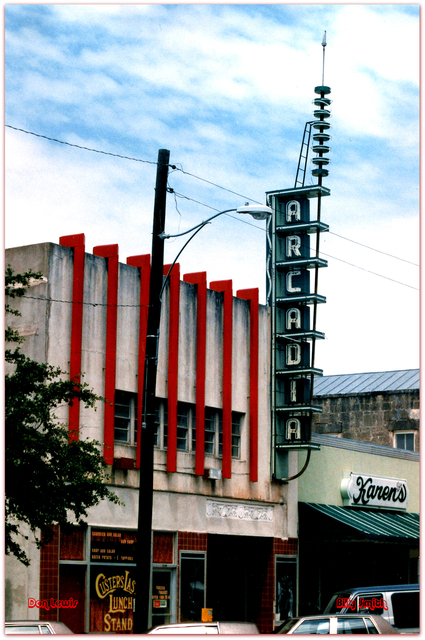 This wild Moderne style theater was apparently originally built in ‘Spanish’ style when it first opened in 1926 and was remodelled in 1948. An ornate lintel is still visible over the entrance. The facade is now grey plaster with a red tile street level, and red metal strips on the upper facade. The sign is an attractive green affair, with each letter on a separate segment, topped by a stack of rings. It was closed in 1988. It was recently host to a community theater group.

Update: so far nothing is happing with this place and plans to convert it to a dinner theater but i did read that there are still plans in the works they are waiting on funds to be raised for the boardwalk to be placed there along the backside of the theater where the river runs through. I would bet the devolopers for the the place want to see if the funds are raised first before starting constuction cause this plan hinges on that boardwalk being built if funds are not raised then i would guess they would abandoned any plans for the property or a the very least reconsider designing the blue prints but also now what a big factor is in all of this is with the constuction of a new 10 plex underway by rio entertainment and the impending construction of the gateway12 by texas cinemas the owners of the arcadia dinner theater had planned on showing movies now they might have to consider live theatre instead because once all is said and done we will have 3 theater locaions with a combined number of screens at 28 which includes the current plaza 6 theater. I just down’t see how they would be able to get good prints because kerrville is a small to mid size town with a population of about 28.000 to 31.000 and with the theaters we would have already by the time the arcadia dinner theater would be ready the other three theaters would be open and theres not enough(I THINK)population to support another theatre cause fredricksburg would have by then a 3 screen whose construction is almost finished as we speak.

My pix of the ARCADIA in Kerville:
View link

My photograph of the ARCADIA in Kerrville View link

I lived in Kerville as a child, ages 7 through 11, from 1942 through 1946. During those years there were two movie theaters in town, the Rialto which showed the first run films, and the Arcadia which showd the second run films. I originally paid an admission of ten cents which was increased to fourteen cents when a forty percent wartime tax was added. The Arcadia featured a Saturday matinee which was usually a cowboy film, a cartoon, a newsreel, and a segment of a serial. In both the Rialto and the Arcadia, there was always freshly popped popcorn which, if I remember correctly, was a dime for a box. There was also a good selection of nickel candies.

The Arcadia had a side door emergency exit that opened onto a sidewalk that also reached the publc (whites only) swimming pool. Many were the times when a group of us would go to the Saturday matinee, one person paying to get in and then going to that side door to let the rest of the gang in. Shame on us!

There were also the many times that I would be accompanied at the Arcadia by my dog Laddie who would sit in a seat beside me.

Here is a 1984 interior photo:
http://tinyurl.com/yewqyum

From the early 1980s, the Arcadia Theater in Kerrville.