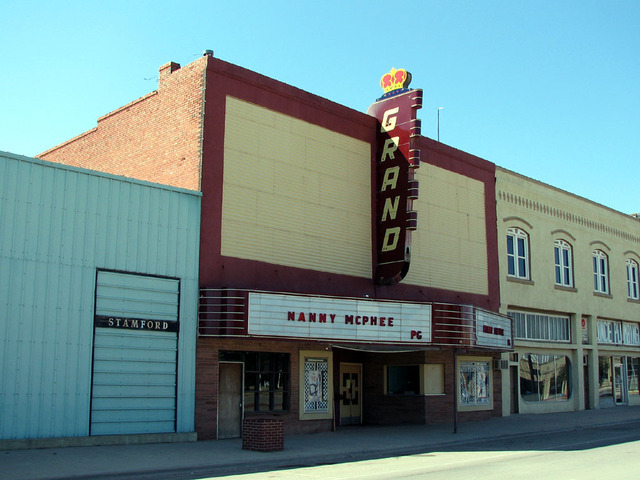 The Alcove Theatre was opened prior to 1926 when it had 300 seats. By 1932 it had 500 seats. It was renamed Grand Theatre in 1937, still with 500 seats. In 1950 it was enlarged to accommodate 810 seats and the current façade was installed. The street level is now done in pink brick, and the upper story is red plaster with some unattractive beige sheet metal covering large squares on either side. Not sure what’s underneath. The marquee is a very nice burgundy with cream and the vertical has a colorful crown on top. Unfortunately, the vertical has no neon. The Grand Theatre was closed in 2011.

Renovations began in 2016 and in September 2016, the marquee was repaired and re-lit. Renovation work continued and it reopened on November 23, 2018 with “The Grinch”. It is now a 350-seat movie theatre run by the community for non-profit.

The Grande Theater in Stamford, Tx is open Sunday, Monday, Tuesday, Friday, and Saturday every week. The neon lights in the front have been fixed.

They run a different movie every week. I saw “Christmas With the Kranks” when I was in Stamford visiting my grandparents in December 2004. Tickets are only $3. I think there were only 2 people working there. You buy your tickets at the concession counter. Some of the seats need to be repaired. The balcony was closed. I don’t know why. Overall it was a wonderful experience. Hopefully it can remain open for years to come.

I believe the area code for the phone number listed should be 915.

My photograph of the GRAND theater.
www.flickr.com/photos/lastpictureshow/269111424

A 1990 photo of the Grand Theater in Stamford.

STAMFORD, TEX-The Grand Theater here, recently purchased by H&H Theaters from Robert Brown of Abilene, has been closed for remodeling which is expected to be completed in about two months. The building will be lengthened 25 feet and converted into a stadium-type structure. Changes at the front of the house will include shifting of the box office and installation of a refreshment bar. Refinements in the auditorium will include new carpeting, indirect lighting and wall murals. A larger screen will be installed. Sandy Hodges is co-owner of the house.

I don’t know if the Grand Rich Theatre in Stamford, mentioned in this item from the September 5, 1936 issue of Motion Picture Herald, is this house or not, but it could be:

“The Griffith Amusement Company, Oklahoma City, has opened its new Grand Rich theatre in Stamford, Texas, and has taken over the State in Odessa, the Texas in Ballinger and the Queen in Winners, all in Texas.I haven’t found the name "Grand Rich Theatre” anywhere else on the Internet, so it might have been an error, or perhaps it was only used briefly. The Film Daily of September 12, 1924, said that a new theater was being erected in Stamford Texas, but no other details were given. I’ve found the name Alcove Theatre in the trade journals only once so far, dating from 1929, so it could have been the 1924 project.

Earlier theater names used at Stamford include houses called the Cozy, the Cozy Airdome, the Crystal, the Joyland, the Candy, the Dixie, the Ideal, and the Majestic Summer Garden, the latter two having been the only movie houses listed at Stamford in the 1914-1915 American Motion Picture Directory.