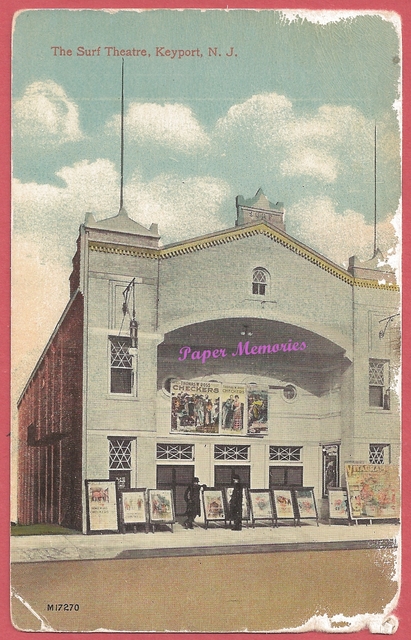 Opened as the Surf Theatre on December 23, 1912. It went from vaudeville to movies and was renamed Strand Theatre by 1941.

Listed as open in the 1944 FDY. Listed in the 1961 FDY as part of Triangle-Liggett Theatre Service.

According to this source, the Strand was called the Surf Theater when it opened.
http://tinyurl.com/m2xvzg

59 W. Front Street is the building that most closely resembles the 1973 photo and what I can see in the postcard:
http://tinyurl.com/n5uscn

The source ken mc linked to on July 18 last year says the theater was built in 1912, and thie following item appeared in the journal American Architect and Architecture of July 24 that year. Datelined Keyport, it read: “Architect Coleman Gray, River and Salem Sts., Hackensack, has completed plans for the erection of the new Deckert’s Theater on Front St., to cost between $17,000 and $18,000.”

I haven’t found any other sources mentioning a Deckert’s Theater or a theater owner named Deckert, but the item most likely pertains to this theater. Coleman Gray shows up in a couple of search results at Google Books, but none of his other projects are identified.

Funny, caption of the photo in my above link, incidently from the same source as Ken Mc posted above, states photo is ca 1908. Don’t these editors cross check their own book?

The book also gives the date of the ad below the theater’s photo as 1911, but the version of “A Tale of Two Cities” that starred William Farnum wasn’t released until 1917.

I like the Arcadia Publishing Company’s historic picture books, but some of them do look to be rush jobs with sketchy editing.