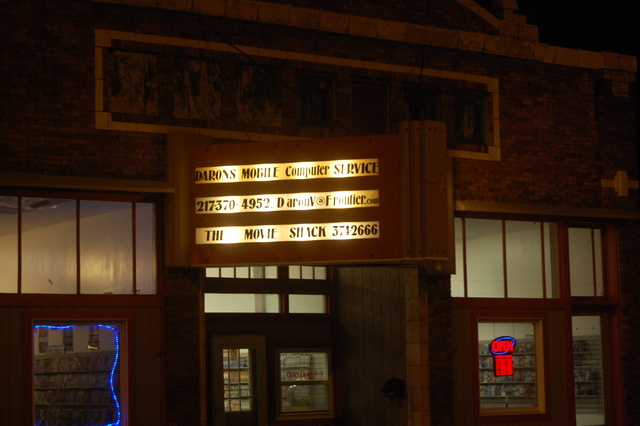 The Princess Theater served the farming community of White Hall, Illinois during the early decades of the 20th century with both live theatrical performances as well as motion pictures. The single-screen theater building included two small retail offices on its street facade, a modest marquee and box office.

The theater opened on August 28, 1915 with “The Christian”. It was remodeled in 1937. The Princess Theatre ceased operation in 1957. It was purchased by a local furniture store and has been used as surplus storage space ever since. In 2000, the rear of the the building collapsed.

The Princess Theater building is at 120 N. Main Street. It actually looks to be in pretty good shape, in both street view and satellite photos.

The March 13, 1915, issue of The American Contractor had this item about thenew theater being built at White Hall:

This item is from the November 6, 1915, issue of The Moving Picture World:

“On August 28, last, the White Hall Theater Company, Inc., of White Hall, Ill., opened its Princess theater. The initial picture to be played at the house was the feature entitled ‘The Christian,’ and the ticket office registered 1,037 paid admissions for the first day of business.

“The outside dimensions of the structure are 40 x 138 feet. It has a seating capacity of 500 and cost $19,000 to erect. It has been equipped with a 25-foot stage. The manager of the Princess is Carl Lowenstein.”In 1911 White Hall had a movie house called the Bungalow Theatre. I haven’t found any details about it, or what became of it.

I have found photographic evidence of the possible Bungalow Theatre on Main Street in White Hall in 1925. It is the former Union Hall now demolished, directly across from the Princess Theatre. It has a poster out front that reads “Big-Hearted Jim”, which was a 1925/`26 comedy/drama per the American Film Institute Catalog of Motion Pictures. I will temporarily post the photo in the gallery so the Admins & experts can examine it. I have a 2013 street view link that still has it standing, but the link will not post to CT correctly. Here is a Flickr link of what the now demolished building looked like. It is also in the 1925 photo in the gallery for comparison. Address was 121 N Main St, White Hall, IL 62092.

CT page added for the Bungalo Theatre across the street from the Princess. Former Union Hall building, demolished sometime after 2013.