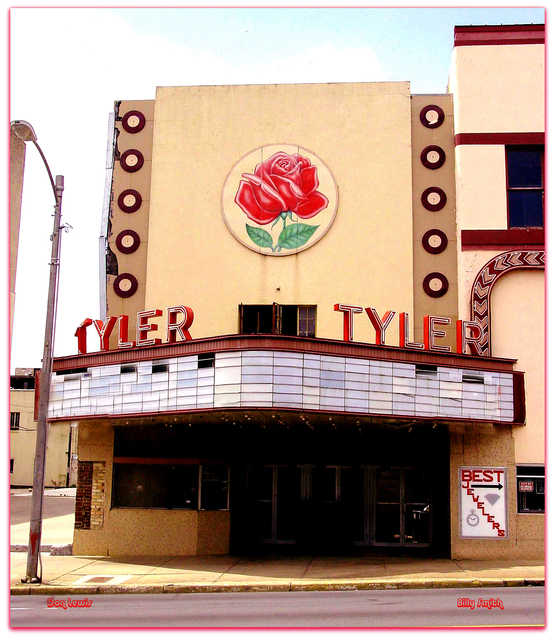 The Tyler Theatre was opened on August 2, 1940 with Ann Sheridan in “They Drive By Night”. Operated by Interstate Theaters Inc., it was later taken over by Plitt Southern Theatres who closed it in 1982. Famous for producing beautiful “Tyler Roses”, the city of Tyler has let a cinematic rose die. The theatre has been gutted and converted into retail use.

I’m not sure when this photo/rendering was taken, but judging by the film listed on the marquee this image is from the early sixties.

The August 10, 1940, issue of Boxoffice said that the Tyler Theatre had recently opened to overflow crowds. The opening was attended by actor Brian Donlevy, star of the first feature shown at the new house, “The Great McGinty.”

Interstate had been planning the Tyler Theatre since 1937. According to the November 13, 1937, issue of Boxoffice, the circuit had hired architect W. Scott Dunne to design the new theater, but Dunne had died suddenly, delaying the project.

As with the Interstate Circuit’s Alabama Theatre in Houston, also put on hold by the Dunne’s death, the Tyler Theatre was ultimately designed by the firm of Pettigrew & Worley. Four photos of the Tyler’s Art Moderne auditorium were published in the February 22, 1941, issue of Boxoffice.

I worked at the Alabama Theatre in Houston when it was managed by Howard Skelton. In the mid 1960’s Mr. Skelton was transferred to Tyler, Texas as the city manager. He was a terrific guy. Can anyone who lives in Tyler update me on what happened to Howard Skelton? I will always remember him as the first manager I ever worked for.

Good job City of Tyler. That’s some real forward thinking you’ve done with three classic theater buildings that are/were within sight of each on the city square. I don’t know of any other city that can match that.

A view of the Tyler Theater @ this link http://preview.tinyurl.com/3brwx6f

Don: It’s pretty easy to embed links now, using markdown code. Put the text that will become the link between square brackets [thus], then copy and paste the url between parentheses (thus). You can leave spaces between words in the text as usual, but leave no other spaces. Below, I’ve put Tyler Theatre between square brackets and put the photo’s url at Flickr between parentheses. That’s all there is to it:

A view of the Tyler Theatre

This opened on August 2nd, 1940. Grand opening ad below 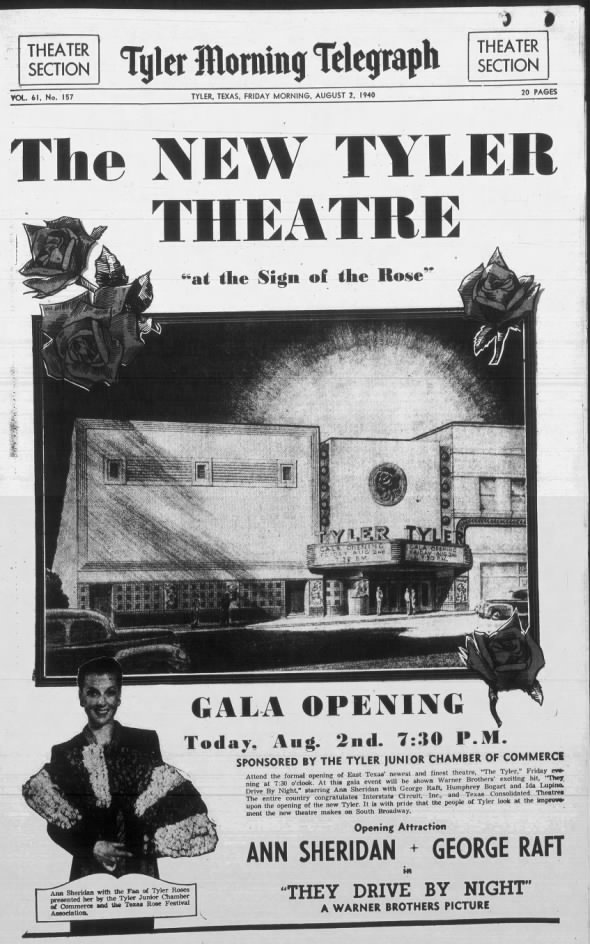 Closed in 1982 by Plitt Southern Theatres.