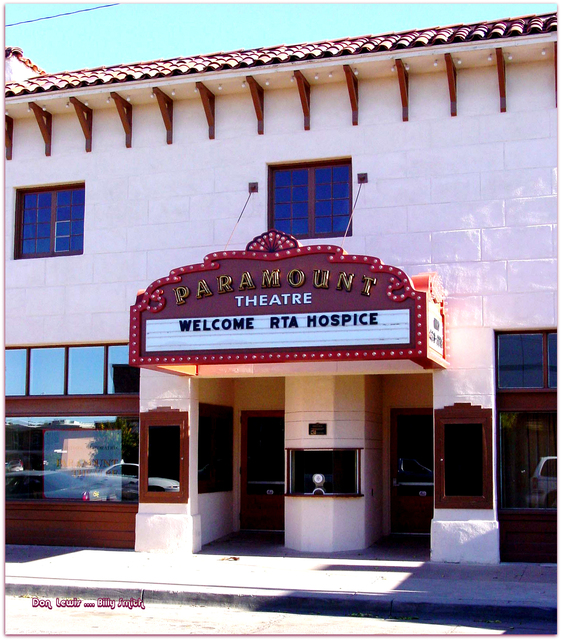 The Paramount Theatre first opened its doors on October 23, 1929 in a gala Grand Opening that featured Gloria Swanson in her first talking picture,“The Trespasser”. It had a seating capacity for 650.

This event heralded the beginnings of an era when the Paramount Theatre was the prime entertainment venue in Casa Grande, a distinction it has retained" to this day. The Paramount Theatre was built for the Publix, Rickard and Nace organization at a cost of about $35,000. Harry Nace ran a chain of movie theatres, which included such theatres as the Orpheum Theatre in Phoenix, built in the same year.

An early news article noted that architect Hugh E. Gilbert of Phoenix was in charge of construction. Accounts indicate that the Paramount Theatre did not survive the great depression and was closed temporarily. Long Theatre Enterprises acquired the theatre in 1942.

Soon after the re-opening, the theatre interior was renovated. In the mid-1940’s, the concrete floor was removed and the orchestra pit taken out.
All of the seating was replaced at that time.

In 1970, the theatre was renovated once more. Additional layers of acoustic panels were added to the walls of the auditorium. The brick proscenium arch was removed to make room for the new, larger screen. Renovations to the lobby and balcony areas were even more extreme. The storefronts were removed and used for new bathrooms. The entire lobby was
remodeled, leaving virtually nothing of the original character. The basement areas below the lobby were abandoned.

It was in a 1970 remodel that the facade was altered. Windows on the second floor were covered with a new sign. The storefronts were filled in with movie poster cases. And the box office relocated behind modern glazing to one side of the new, glass entry doors.

any other comments on this theater?

I was living in Coolidge AZ at the time the Paramount was being renovated. It gave me a thrill to see that a peice of Americana was being saved. At the time I was there the area had no movie theatres at all. i was told there used to be a couple of movie houses in Cooledge but when the I-10 freeway was built and took most of the traffic off of Rt 87. Coolidge as a town dried right up.

My 2004 photograph of the PARAMOUNT in Casa Grande View link

From 2004 a photo of the Paramount Theatre in Casa Grande.

Operated by the Paramount Foundation of Central Arizona. Updated website link: http://www.paramountfoundation.org/HOME.html Another function should be banquet hall.