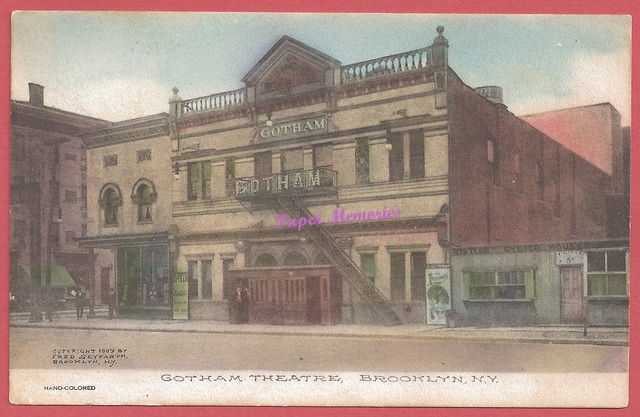 The Brooklyn Music Hall was built in 1896 on the site of William Bennett’s Casino, which was destroyed by fire in 1893. It became the Gotham Theatre in 1901, and was taken over by the Keith-Albee vaudeville circuit in 1912.

The zip code given at the top of the page, 11237, is wrong. The theater was in East New York and 11237 is Wyckoff Heights two miles to the northwest.

Warren, I don’t know why the link isn’t working for you, it does work when I click the link.
if it still doesn’t work, try this link, which will bring you to a thumbnail page you can click on:

This is such a congested area now, hard to believe there was a theater here.

Here’s an early 1900s picture of the Gotham Theater, showing an elevated train, a streetcar, and other vehicles. Click on the picture to enlarge.

The image is reversed! Unless that is the Mahtog Theatre and the photo was taken in England (or anywhere else, where motorists keep to the left side of the road)!

Haha, it is reversed! Someone printed the negative the wrong way….

I’ve corrected the street view. The former site of the Gotham had been a lot as far back as I can remember. At one point, from the 90s forward, it was a used car lot until the Imperial Hotel was built on its site a few years ago.

Just wanted to add a couple of comments…The Pool Hall that wasmentioned survived into the 1980s. The diner survived into the new millenium. As for the former Mueller’s Hotel, when I was a young DJ in 1976, it contained an after-hours club named Arizona Barbara’s. It was a very popular spot, with strippers & all & in those crazy Disco days of the mid-to-late 70s, it had a large clientele & with the Transit Depot being right across the street,needless to say, it was very popular with the transit workers. After Arizona Barbara’s closed for the night, the folks would continue the partying at my club, Club Atlantis a few blocks away at Atlantic Avenue & Wyona Street.

Arizona Barbara’s closed down some time during the 1980s & became a welfare hotel/shelter.

Good to see sharp eyes and helping the site.