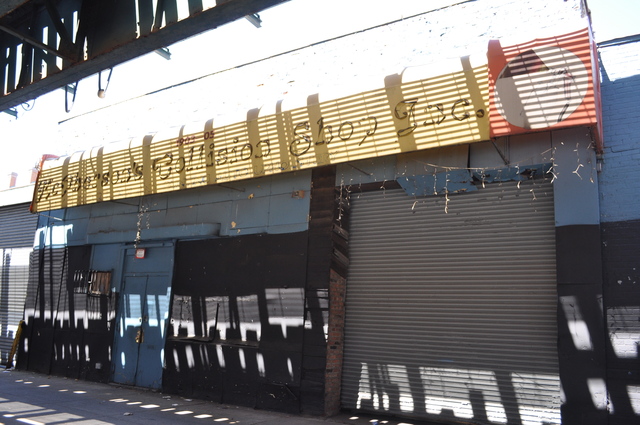 This early cinema in the Bushwick/Broadway Junction area of northeastern Brooklyn was originally known as Pearl Theatre. It was opened in August 1914, and was designed by architect Albert C. Kunzi, with all seating on a single floor.

In 1931, it was renamed Sun Ray Theatre, but closed in 1932, as yet another victim of the simultaneous arrivals of sound movies and the Great Depression.

When viewed in June 2013 (and comparing the site with an E. Belcher Hyde map dated 1929), the building still exists, and is in use as an auto repair shop.

Cezar Del Valle’s post about the Pearl Theatre at Theatre Talks cites an April 11, 1914, Brooklyn Eagle item saying that a theater was to built on Broadway 75 feet east of Eastern Parkway for Herman Weingarten. Del Valle’s Brooklyn Theatre Index identifies the architect as Albert Kunzi, and says the house operated as the Pearl Theatre from August, 1914, until 1929. The post includes a photo of the building that currently has the address 1903-1905 Broadway, but I don’t think the theater was in that building. I suspect that the address 1903 has been shifted to that building at some point.

The “Theatres” section of the April 11, 1914, issue of Real Estate Record and Builders Guide has this item about the same project:

A 1919 item in The American Contractor, about another theater being built for Herman Weingarten, gives his address as 1901 Broadway. Perhaps he had his office in the Pearl Theatre at that time.