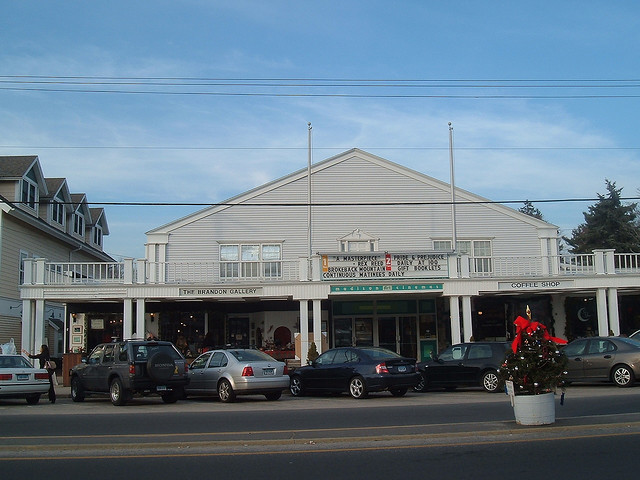 The Bonoff Theatre opened in 1912 originally as a single screen theatre, with a seating capacity given as 597 in 1941. In 1948 it was remodelled to the plans of architectural firm William Riseman Associates and was renamed Madison Theater.

Hoyts Theatres (the Australian based chain)purchased the theatre from its local owner-operator. They twinned the theatre in 1977. At some point in the buildings history, it served as a meeting hall and gymnasium as well. Beneath the sloped wooden floor (painted in Brazilian green) is a basketball court. Upon entering the theatre, the processional is sloped rising to its high point at the concession stand and ancillary boxoffice.

The lobby is T-shaped with the concession stand and passageway to the restrooms and café (added upon renovation) comprising the top bar of the T. When the theatre was divided the screens were placed in front of the stage with stage lights and rigging.

Hoyts closed the theatre as a mainstream Hollywood theatre on April 30, 1998. A new owner, Arnold Gorlick, signed the lease in January 1999 and with the devoted work of Largo Construction Co. of greater Philadelphia (owned and operated by Tony Cimino). The theatre re-opened as the Madison Art Cinemas on May 21, 1999.

The colors of the Madison Art Cinemas are distinctive. The basic color scheme is aquamarine, antique gold and a kind of Chinese type red that Sherwin Williams called Ming Red. The shading of the walls and ceiling in the processional begin with lighter shades ultimately darkening in 7 gradual steps. The left wall starts with a slightly burnt yellow and darken in 7 steps to a cross between terracotta and pumpkin. The left wall has 7 backlit poster frames ascending in proportion to the slope of the floor. Each poster frame is framed by a different color with white sprocket holes painted in the border to give the appearance that each poster is a single film frame. The right wall starts with a natural flagstone and then changes abruptly to a brick wall painted in pumpkin.

The brick wall starts a gallery that extends around the corners into the corridors on the opposite and both sides of the concession stand. Turning right brings one to a small 5-bistro table cafe that seats 15. The café walls are decorated with copies of true antique posters that have been torn and placed randomly to give the impression that there were years of pasting, removing and mounting new posters. The posters were then covered with a very transparent orange wash continuing the color scheme while permitting one to view the mementos clearly. The walls opposite the concession stand continue with the pumpkin-terracotta. The walls behind the concession stand are a mustard color. The ceiling is aquamarine starting with a lighter shade at the door concluding with its darkest shade in the interior lobby and auditoria.

The concession stand has a black veneer with metallic speckles. The accent panels are a mustard color with many abstract color accents. The concession stand boasts a beautiful tomato-red espresso machine. The menu board above continues the red theme. The concession offers a few unusual items, not the least of which are Italian coffees and beverages that is imported from Italy (as is the espresso machine) and each espresso, cappuccino, macchiato is ground, packed and brewed to order. The theatre offers baked goods which include locally baked oversized biscotti and cookies. The theatre offers more baked goods and bagels on many Sundays as part of its Key Sunday morning cinema club.

Each auditorium has a large screen with 12 channels of Dolby Digital sound powered by QSC amplifiers through the best quality JBL speakers. The auditoria have columns which rise from the outside walls and form supports at intervals which span the entire width of the theatre building. The ceiling and supports are coved with bead board. Each pilaster (column) and cross support is painted in aquamarine. The rest of the ceiling which is recessed above the supports is painted in flat black. The common wall between each theatre has faux columns which parallel the pilasters and continue the sight line to obtain psychological symmetry. Each column as an antique looking boxed sconce with a patina. The drapery is tightly pleated and is antique gold. The wooden border that divides drapery from the lower painted red wall is aquamarine. The high seat backs are red vinyl with red and gold satiny upholstery. The seat pans are black and the side panels that are visible are aquamarine. Each theatre has one aisle approximately centered with the seating rows divided into two sections of 6 and 8 seats across. There are amber Tivoli lights in the aisles.

The Madison Art Cinemas provides a highly personalized movie-going experience. The Madison Art Cinemas plays first-run independent art and upscale foreign and domestic films. It is used as a center for community activity with many local organizations using the theatre for fundraisers and community events. It is part of the national Key Sunday Cinema Club and has many special events and programs as well.

It was taken over by a new owner and following renovations it was renamed Madison Cinemas, reopening on January 13, 2022.

I worked at the Madison Theatre from 1980-1984. Me and the other high schoolers who normally worked the candy counter and took tickets all helped with the renovation/twinning. It was actually twinned in 1983. We did a lot of the tearing out of the old material and we put up the sheet rock on the two outer walls. I found a petrified rat on the old gym floor that ended up on someone’s pillow in a dorm room in New Haven.

The manager at the time we twinned it was Ed Marcolini of Saybrook. He took over from the old manager, Dudley Warnes, also of Saybrook. Dudley was in his 80s when I started working there. In 1982 Dudley became ill and Ed moved over from Saybrook Theatre as manager.

The previous comment is correct. It was Bonoff’s Theatre at one time. I have a postcard from the 1930’s showing the front of the theatre confirming this.

A tip of the hat to Mr. Gorlick and this wonderful little art house cinema. In 1998, I went to the Madison Art Cinemas with a friend whom I was dating at the time. We went to a 9 pm show in the dead of winter. When I dropped off my date at her house in New Haven, she was shocked to find that she left her pocketbook and keys at the theater. (How a woman can forget her pocketbook is beyond me, but this is what happened.) So, here it is nearly midnight, and we called the theater in the odd chance that there might be somebody there. As I recall, Mr. Gorlick was staying late doing some bookkeeping and he answered the phone. He said the pocketbook was safe and sound, that he lived in the New Haven area, and would be happy to drop it off for her on Whalley Avenue, saving us a 40-mile round trip. I have been a steady customer of the Madison Art Cinemas ever since. Great guy. Great little theater. Now, if only they would offer real butter on the popcorn…

I just visited this theatre for the first time, since it was showing the acclaimed Brokeback Mountain, which wasn’t playing yet in the Providence area and which I wanted to see badly. The movie is a miracle and unforgettable. Madison is about 80 minutes from Providence, near where I live, and about 20 minutes or so north of New Haven and about five minutes from the nearest I-95 exit. The theatre is plain but comfortable and pleasant. The village of Madison has real character, the scent of upscale, and there are some fine retail shops and coffee shops. There is a cafÃ© in the theatre lobby as well. Here is a photo of the exterior.

I am anxious to see Protocols of Zion. The web site for the movie states that you will be showing the movie on January 8. Is this correct? Do you have the times for the showings? Can tickets be purchased in advance? We will be travelling from RI. Thank you.

I worked at the Madison Art Cinemas back in the day (as in, from 1999 until the time I graduated high school in 2001), and I can safely say it is the best establishment that I’ve worked for. Arnold poured his heart and soul into the place, and it showed. The crowds were great, and the environment was, too. I’ll never forget when we brought “Saving Grace” through, and at almost every showing I’d peak my head in the doors at certain points in the film just to catch the crowd’s laughter explosion. Not a bad sound system, either. Go ahead and ask Arnold. He may have a thing or two or three hundred to say about it. Power to the M.A.C.

This was listed in the New Haven Advocate’s Annual Manual. “Beloved, comfy two-screen theater in downtown Madison that screens indie and foreign flicks. Arnold Gorlick and his staff add care and a personal touch to everything from the sound system to the concessions.”

There’s a pic at the bottom half of the front entrance and marquee with Screen 1 showing Anne Hathaway is Jane Austen, Becoming Jane and Screen 2 with Broken English, Mature Romantic, Two Days in Paris.

Please rename, its the Madison CInemas and the website is madisoncinemas2.com Theatre reopening January 13