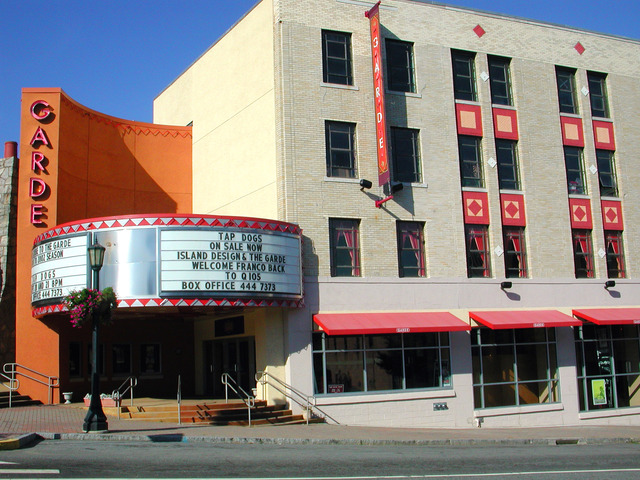 The Garde Arts Center is one of the few remaining movie palaces in Connecticut.

Opened on September 22, 1926 as the 1,603-seat Garde Theatre, when the building was nearing completion, architect Benjamin Schlanger was consulted on the ‘stencil on plaster’ decorations in the auditorium. This former movie and vaudeville palace has been carefully and completely restored.

Now a performing arts center that still occasionally shows classic films, the Garde Arts Center is one of the most lavishly decorated theaters in the country.

The marquee reminds me of the one that was on the late, great Coliseum Theatre in Seattle.

I’ve been past this place a few times, next time, I’m going in to see a show.

Listed in the New Haven Advocate’s Annual Manual. “A bonafide 1930s movie palace restored in the 1990s to its former magnificence and now serving as a multi-media performing arts center, with a Broadway subscription series…not to mention skads of children’s shows and a summertime film series. A major venue in an out-of-the-way seaside city, you never know if a show will be sold out or desolate; just go with the flow.

This New York Times article mentions the Garde (toward the bottom) – it has been struggling as a performing arts center in the face of competition from newer venues though the news has improved recently: View link

Wurlitzer installed their pipe organ opus 1302 here in 1926, a very modest Style E, 2 manuals 7 ranks in one chamber. The organ was later moved to the Crystal Palace in West Goshen CT.

The theater plans to once again offer movie screenings on a regular basis, after the recent installation of a newfangled 4K Digital Cinema Initiatives (DCI) compliant digital projection system with eight channel surround sound, said to rival any similarly outfitted moviehouse in the region (with a screen that, at around 40 feet by 25 feet, is one of the largest non-Imax screens in the state).

The first major engagement planned for the screening is the 2015 Winter Film Festival, which starts up in January.

New article with a fairly detailed history of this theater, along with photos from the late ‘20s thru today – http://gardetheaterhistory.blogspot.com/2014/12/the-grande-olde-garde-history-of-new.html