Just posted grand opening ad as a Triplex on January 27, 1984. Ad in photos section. @rivest266 your one week off 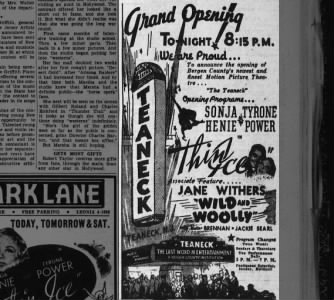 Reopened by the Movie City chain on February 3rd, 1984 with three screens. Ad in the photo section.

I have many fond memories of this place.

Hi, Would anyone know if the new owners of the Teaneck Cinema will continue to use the services of Moviefone.com to up-date their showtimes ? (For me, this is my main source of movie information.) I’ve only noticed thier showtimes on Fandango.

Does anyone know if there are plans to bring into the Teaneck Cinema a “classic film” program as was the case with the former owners?

The theater’s website hasn’t been updated . Have no idea what’s playing or its timetable.

This is very good news, John. Can’t wait to pay a visit during the holidays.

Would you know if they have the capacity for both 35mm and digital, or are they 100% digital, now?

The theater had been in very bad shape last I visited in the spring of 2011 before they closed (I had seen a movie in the main auditorium where they used the curtain – cool, but the projection was out of focus, the sound was too low – especially for a dialogue driven Wit Stillman comedy, and the theater was freezing).

From the photos this place is looking great – with a complete modernization and a restoration of the some of the original art deco elements that were buried 20-40 years ago. I can’t wait to check it out this week!

I remember going here every weekend as a kid, so many memories.

this and the local ridgefield park theater (when it reopens) are the best ticket in ridgefield.

Hi, May I take a moment to wish Mr. Latten every good fortune in his efforts to breathe new life into the Cedar Lane? And it was wonderful,Ms. Joyne to see your photographs of the interior and the progress being made thus far. Looking forward to making the trip in from Wayne for the grand “re-opening”. Cudos to all involved who show a desire to preserve the local, neighborhood cinemas as a viable alternative to those “rip-off houses” on Rte. 17, etc.!

Good news is a new operator is coming in and with new seats, digital projection, etc. New seats being essential, the previous owners really ran the place into the ground – last time I had seen a show the projection was under lit, the sound was virtually inaudible (and at a dialogue-centric Whit Stillman movie – no less!) and I had an allergic reaction to how musty the place was. I have no doubt it’ll be awesome with some upgrades. I think this and Bergenfield fill a valuable nitch – Bergen County has some high price tickets and an operator offering an alternative to the $12.50 at GSP and $12 Clearview charges is a good thing (especially since the crowd here was typically older and I got the sense frequented the place weekly – – if only exhibitors would do things to cultivate a frequent audience instead of trying to kill off programs like MoviePass)

Jerry, thank you for posting that great story. Please post some more if you can!

Hi, my name is Jerry Littenberg, retired and residing in Mexico. I’m sorry to hear of the closing of the Cedar Lane Cinemas… From the late 50s throughout the 60s I managed the then called Teaneck Theatre (the usual spelling of theaters across the nation until the 70s), operated by the Skouros Theatre Corporation of W. 48th St. in NYC.

This was my first theater as a manager. I was the assistant manager at the Fox theater in Hackensack when the Teaneck manager died suddenly, and my district manager, Curtis Mees appointed me the new manager to this cute theater with 1000 seats, and great air conditioning.

I remember some of the great films that I played there: “Some Like It Hot”, “Auntie Mame”, “The Ten Commandments” (this one after making its rounds in NYC)… The theater staff was great too: Kay O'Donnell as my assistant manager/cashier. Joe Forti, in the projection booth, Jane Shalowitz in the concession stand, and Jane and Ernie June in maintenance, just to name a few…

I had the opportunity to change policy at the Teaneck, from second run double feature after Hackensack to single feature: The Queen Ann Theatre in Bogota had as its policy to show foreign productions, mostly from France and Italy, when the opportunity arose for us to pick a French film to play at the Teaneck because of full booking at the Queen Ann. So “And God Created Woman”, with the French kitten Brigitte Bardot ended up at the Teaneck, with lines around the corner coughing up $2.50 each to see the sexy Bardot in her early years.

But this one was a huge hit: My grosses were so high that my bosses had to telephone me to confirm them. Its success was due, in part, to the Catholic church’s dislike of the movie, which the Vatican openly condemned. To advertise the movie, I made two banners that said “Condemned by the Catholic Church – Theater manager gives it FOUR STARS!”, and hang them from the marquee. The Diocese of Teaneck called me to assure me how displeased they were at my advertising methods, so I altered the sign so it would read : “condemned by you know who”… The phones lit up the next day!

Since then I have managed many theaters in New York, California and Northern New Jersey. I hope someone comes along and, impressed by the pedigree of this nice little theater, renovates it and updates it to modern day standards.

Sorry to be cynical, but some of these folks just burn me up. I know it’s very bad for Cedar lane, it looks terrible, and will negatively affect other businesses around them. But let’s get realistic. Nelson tried like hell to keep the place running while trying to get funding for the digital equipment, but he could'nt make it happen. If the folks in Teaneck can make something happen, great! But as a functioning movie theatre, I think it’s done. Even if only one theatre can be upgraded, what are you going to do with the rest of the place? Removing one wall downstairs and partially restoring it as one larger theatre is possible, but who’s going to pay for the construction? And what would you play in the theatre? First run movies are expensive to book, with the studios taking approximately a 80/20 split of the first weeks gross. You would have to charge first run theatre prices; forget about the $5.75 admission. You gotta sell a whole lot of popcorn to make a decent profit. Showing “classic” films is possible but would the town support this? After all the drum-beating and calling for committees to form to save the theatre, people will realize that only one thing will reopen the place, MONEY, and a continuous supply of it.

Interesting the Teaneck Film Fest is interested: they used this theatre and a few other venues around town (we saw a screening at the fest a few years ago that played in a conference room at a law office – yet the audience was very engaged and the Q & A following the movie was great).

If they had deeper pockets (and/or found money for this kind of project) a real art house eliminating that “4th theatre' (and converting it into a gallery or reception space) might be something the community could support with filmmaker events and family programing. Despite parking being a little bit of a pain, the location is viable, it just requires an extensive remodeling job. Or, perhaps its on Alamo Drafthouse' radar – they have 3 projects under construction in the area now (Yonkers, NYC and Brooklyn) and they like to redo historic theatres.

Hotwaterbottle: as one of the more cynical readers here (and I’ve been around this block more than once), I agree with many of your comments. But unfortunately it is only AFTER a theatre closes that people take an interest in it. And often, though I don’t understand why, these folks are more successful raising money than a business is. If the theatre could be “saved” (cringe)It would most likely have to operate as a 501c3 and require constant fundraising efforts to keep it alive. But it’s possible.

This “grassroots effort” makes me laugh. Where were these people when the theatre needed them? When was the last time any of them attend a show there? Or were they sitting on their thrones at home carping about how the manager was rude, why are the bathrooms upstairs, the films are out of focus, etc? These people should be glad the place is gone; now they don’t have to deal with it. They took the place for granted. Now that it’s gone, the hand-wringing and teeth-gnashing begins. “What? It’s GONE?? Oh my God!! This is terrible!! We’ve got to DO SOMETHING!!” All this will fade away when these right-minded folks realize that the only way to bring the theatre back is with a king-sized infusion of MONEY. $500,000 will do it. Think there will be any takers? Clearview does'nt want it; they are on the brink of collapse and are looking to sell off their assets. Nelson tried for 1 year to get funding and could'nt do it so he, regretfully, pulled the plug. Nobody in their right mind will sink half a million dollars into the place knowing they will never see a return on their investment.

A grassroots effort has been launched to help save the theater: View article

While looking through old movie ads, i found one from 1967 that’s a fitting valedictory for this theater and for the way things used to be: ALFIE – 14th Big Week!

Two other memories of this theater: seeing It’s a Mad Mad Mad Mad World in 2009. An expert on the film spoke before it began, and he even brought along a hat that one of the actors actually wore in the film, but a rude patron started heckling him and told him to get on with the show. I felt like yelling back at him, “This IS the show!”

Also, the Teaneck/Cedar Lane had a mural over the staircase of Burt Lancaster’s 1955 Western, The Kentuckian. I didn’t think anyone else really loved that film besides me!

And here, indeed, here is another story about the Cedar Lane’s closing that confirms that the closing was due, at least in part, to the cost of going digital: View article.

At least thee appears to some hope that the theater may survive as a performing arts center.