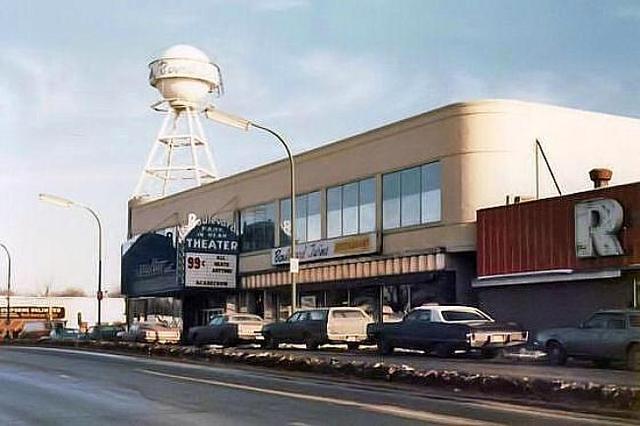 Designed by Perry E. Crosier in 1933 in Art Deco style and seating about 1,000, this theater opened as the Boulevard Twins Theater, not because it had two screens (though it was later twinned in the late-1970’s), but because it was partly a movie house and part restaurant, a format it retained into the 1960’s.

The former Boulevard Theater housed a video and DVD rental store, in a touch of irony. However, its beautiful Art Deco style marquee was still intact and still used by the store. By summer of 2012 it had been converted into the Champion Ballroom.

I forgot to mention that the Center Mayfield Theater in Cleveland Heights, Ohio, has also been converted into a Hollywood Video, similarly preserving the marquee. I wonder if there are more of such conversions across the country?

Wow. Any photos would greatly be appreciated! I haven’t heard of Hollywood taking over another theater. I am going to look into that. It is interesting to say the least. Just to know that there is such great history in this builing….what it meant to the community and just the sheer beauty of it! Luckily due to it being a historical building Hollywood can’t do much to it. The original marquee is still there and the over all structures inside are still original. It is a one of a kind video store that’s for sure!

Remember the place well-there were two restaurants, a coffee shop on the 1st fl and the Hollywood Crystal Room upstairs. It was an attempt to bring in fine dining- WCCO even put an antenna on the roof and broadcast Your Reserved Table Fri nites; the 13th ward was dry, however, and you couldn’t have fine dining without liquor. Had a companion theater, the West Twin in StPaul. Used to see the owner W R Frank eating in the coffee shop- was in awe of him as he’d actually produced a movie- he made a movie about Sitting Bull that he ran for a week every year. Saw it for sale on video but didn’t buy it- I’m sure it was terrible- but it was neat that one of our locals had made good.

In about 1962 when I was no more than four years old, I remember sitting in our car as my mother approached Lyndale Ave. from what was probably Minnehaha Pkwy. I have a clear memory of seeing a strange, watertower-like structure atop an old building. And ever since then, I’ve wondered just where exactly that odd structure was located and what the building was. I knew it was somewhere near our house at 48th and Colfax, but finding out exactly where seemed too daunting to me. After all, I may had simply dreamt it! Well, just a few days ago I happened to amble into the lobby of what used to be the Boulevard Twins Movie theater, where they display some images of the theater and the surrounding neighborhood from bygone years. And one image stopped me dead in my tracks: There, in all its robot-like eerieness was that image that had so indelibly stuck in my head for more than 40 years. What a sweet revelation!

I saw over 100 films at the Boulevard and I am very sad every time I go by the theater. The theater was twinned in 1972 and nearly every bit of the original art deco designs were removed at that time. The popcorn was absolute perfection until they installed a new Creators machine in the late-70’s. It was the finest in the city.

You and a Date, for a buck ninety-eight! Ah the memories of this place.

I remember as a child watching the 99 Cent Movies there. My 1st Job was at St.Cyr’s Restaurant right next door. I worked there until it had closed.I still remember the Electric Organ playing in the Dining room.

It is 8:17pm June 8th 2012, and I am sitting at what used to be the checkout counter of the video store. This building is now Champion Ballroom. The band tonight is the Vic Volare' Quartet. I am watching the door for guest hosts, Cindy and Terry Gardner (TC Swing). The usual hosts, Shannon and Bill Butler are out of town. http://www.championballroomdance.com/