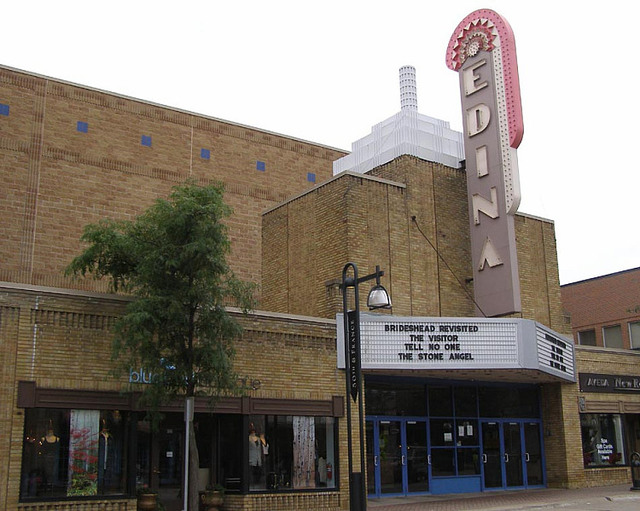 Though initial reaction by the citizens of Edina Theatre to a glitzy movie house was mixed at best, especially to a glittering marquee in downtown Edina (which was remedied by switching the design of the marquee from a standard canopy marquee to a tower marquee), it was an almost immediate success.

The Edina Theatre boasted all of the most modern technology of the day, including hearing devices for the hard of hearing. However, it also featured enough glamour and luxury to remind patrons of the downtown movie palaces of earlier years, such as a large stage, a 300 seat balcony and seating for 1,000 on the orchestra level, air-conditioning, a large fireplace in the lobby for the cold Minnesota winters, murals in the lobby depicting old Edina, stylish Art Deco furniture, and even a nursery for children.

In 1951, during a severe wind storm, the towering marquee was bent in half but soon repaired. However, three decades later, when a twister hit Edina, the theatre’s marquee was totally destroyed, but was recreated in 1981 and is now a listed historic landmark.

In 1988, the theatre’s then-operator, Cineplex Odeon closed the Edina 3 and all but its Art Deco landmark façade and marquee were torn down. A modern, two level fourplex was built behind the façade, opening December 16, 1988.

Loews Cineplex shuttered the Edina Cinema in January of 2003, but in March 2003, the theatre was acquired by the Landmark Theatres chain, and finally became the art house that it was originally intended to become in the late-1970’s. It was closed on March 16, 2020 due to the Covid-19 pandemic. In May 2021 Landmark Theatres announced the closure would be permanent.

Architect is listed as “unknown” but first sentence credits (and correctly) Liebenberg & Kaplan. The correct entry in the architect field will get a truer search result when querying by “architect."
Thanks!

The architect of the Edina Theater was Jack Liebenberg (Seeman Kaplan his partner was the busnessman and engineer in the practice).

This is my favorite Twin Cities cineplex. The interior has an art deco look and feel to it that in a way makes it seem like a glitsy classic theater. I’m glad that the original exterior front facade and marquee was save and incorporated into the new cineplex. I look at this theater and wonder why this kind of development doesn’t happen more often instead of complete demolition.

This was one of the typical Cineplex Odeon “Jewelbox” theatre built in the late 1980’s.

I saw a re-release of Star Wars here back in 1979 or so, as well as Robocop (while it was still a triplex). After the 1989 remodel, it became one of my favorite theaters to see new movies (if not my favorite). I saw Indiana Jones and the Last Crusade, Jurassic Park, Batman, The Lost World (JP2) all in their initial runs here and many other movies here in the 1990s.

The Edina Cinema closed for the COVID-19 pandemic n March 16, 2020. Landmark Theatres announced in May of 2021 that the closure would be permanent.