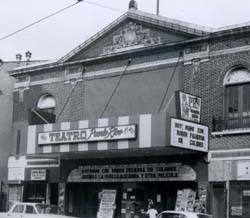 This theatre opened as the Cohooksink Theatre in 1920 and sat 927. Later known as the Diamond Theatre when it was remodeled in 1937 to the plans of David Supowitz.

Later it became a Spanish-language movie house called the Teatro Puerto Rico in the 1960’s, but returned to mainstream movies later, though retaining the Puerto Rico name.

I believe this building was originally called the Diamond Theater. The actual address was on Germantown Avenue, a diagonal street that passes very close to the 6th & Diamond intersection. In the ‘80s this theater would occasionally show up in the Philadelphia Inquirer’s neighborhood movie listings; by then the films were typical Hollywood releases but the theater was still called the Puerto Rico.

Here is a contemporary view. The building is still standing but is not in use:
http://tinyurl.com/qmowk4

Here is an undated photo from the Irvin Glazer collection:
http://tinyurl.com/yakgkkb

Would anyone be able to share when this theater closed? After its closure, a Puerto Rican congregation used the space for religious services. Today, the building appears vacant. “FOR SALE” is scribbled on the façade.

Warren, here is a more specific address: — 2117-7123 Germantown Avenue, Philadelphia PA 19122. On Germantown Avenue, the theater is at North 6th Street between Diamond Street and West Susquehanna Avenue. The theater opened in 1920 as the Cohooksink Theatre, was renamed the Diamond Theatre (c. 1937), and finally became the Teatro Puerto Rico in the 1960’s.