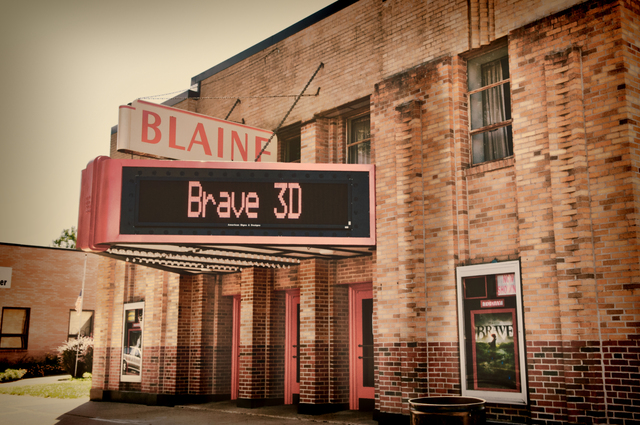 The Blaine Theatre is half of Boscobel’s Blaine Community Building; the other portion is a gymnasium, also used for public events. The theater is operated by a contractor under a long-term lease. The Blaine was built in 1934-35, from a moderne-influenced design by Nerlinger and Durrant, with funding from the Federal Emergency Relief Administration.

Both parts of the buidling were named for Boscobel’s best-known resident, former Senator (and two-term governor) John J. Blaine, who had died in April 1934.

This information indicates that the Blaine was built in 1934-35. Does anyone know if there was a movie theatre in Boscobel, WI prior to this?

Lost Memory, thanks for posting that picture!

I would still be interested in obtaining information about a theater in Boscobel prior to 1934-35.

The Blaine Theatre was designed by local architect Joseph G. Durrant. Durrant established his practice in Boscobel in 1933, and the Blaine was one of two theater/community center projects he designed the following year, the other being at Montfort, Wisconsin. The Montfort building has been (insensitively) remodeled and its Fort Theatre converted into a post office, but the only desecration at Boscobel is a bland addition to the community center building.