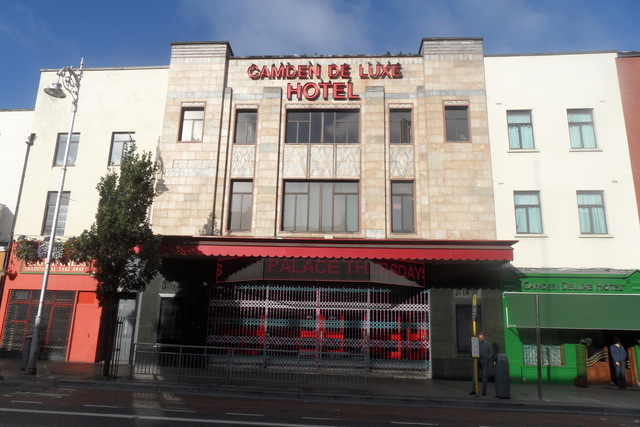 Located in the south of the city centre. The Theatre De Luxe was actually built on the site of the 1912-built Theatre Deluxe. The ‘new’ Theatre De Luxe was built in 1920 in a Neo-Classical style It was designed by architect R.M. Butler and opened on 4th September 1920 with 1,200 seats. In 1934 the façade was remodelled in an Art Deco/Egyptian style by architect Alfred E. Jones of architectural firm Jones & Kelly. The auditorium was also re-modelled and the seating capacity increased to 1,395 when it re-opened 19th October 1934. It had a 30ft wide proscenium, a 32ft deep stage and there were six dressing rooms. For much of its career, the Theatre De Luxe was a second-run cinema and part of the Rank Organisation chain of cinemas.

The Theatre De Luxe was closed on 29th June 1974. It was sold to the Gael Linn organisation who planned to convert it into a Irish language live theatre, but those plans never materialised. In 1979 a new floor was extended across the auditorium at balcony level and the upper section became Ricardo’s snooker club, which was seen in the 1991 film “The Commitments”. The former Theatre De Luxe was later converted into a hotel, which had closed by 2014.

The Camden or Theatre De Luxe opened as a cinema in No. 85 Camden Street Lower on the 16th of December 1912, through the efforts of Maurice Elliman, a Jew who escaped the pogroms that swept Eastern Europe from the 1880s onwards. The first building was designed by Frederick Hayes, MRIAI, and built by George Squire & Co. Nothing remains of the original cinema; although doubtless it was quite compact. Squire carried out the incorporation of No. 86 into the complex in 1920, of which the richly-decorated plasterwork ceilings in the ground-floor bar and what is now the first-floor pool lounge remains. No documentary evidence of the outward appearance of this building has come to light. This second phase, according to an advert in the Irish Times opened on the 4th of September 1920, and was refitted â€œat an outlay of Â£30,000â€

The theatre is an Art Deco design, along the lines of Robinson and Oâ€™Keeffeâ€™s Carlton Cinema, with a faÃ§ade adorned with geometric patterns of golden quartzite, and dark green marble encasing the ground floor walls. A short flight of white-marble-clad steps enclosed within the entrance canopy leads to the octagonal entrance lobby.

In its hey-day the cinema seated 1,395 patrons who parted with the admission fees of between 9d and 11/9d to view the 16-foot by 23-foot screen. The cinema era ended on Camden St in 1975 when the building was sold to the Irish language group Gael-Linn, who proposed to operate a theatre dedicated to Irish plays and provide for local community use. However, these plans were scrapped, as Gael Linn could not secure the necessary loan from Dublin Corporation. Instead the De-Luxe cinema became â€œRicardoâ€™sâ€ snooker hall in 1979. Thus, what could have been a much-needed cultural boost for the city and the Irish language was lost. The De-Luxeâ€™s little-known â€œclaim to fameâ€ is that the upper-room, now a night-club, was used for the rehearsal room scenes in the film The Commitments. St Peterâ€™s church on Aungier St was also used in the film.

The importance of the building lies in its survival as one of only two Art Deco buildings in the immediate vicinity. The other comparable example is the Olympic Ballroom on Pleasants St, which once boasted a fine interior, including the Vitrolite-clad foyer. These buildings form part of the social history of the area, a reminder of an entertainment and popular-cultural age now gone, where cinemas and ballrooms were the staple entertainment diet of the pre-television era, providing glamour and romance in the depressed war-time and post-war period.

Art Deco was closely linked with the rise of Jazz music in the 1920s and 30s, which the dizzy geometric forms were seen to emulate. While this style was generally used in Dublin cinemas, possibly the finest, and best-preserved, example of this style is the Gas Company building on Dâ€™Olier St, where the faÃ§ade is decorated polished stone veneer and metal windows.

Taken from Camden & Wexford St â€" A study of the past, A vision for the future by Mairead Ni Chonghaile. Dublin Civic Trust 2001. pp25-26

If you are ever in Dublin the Camden de Luxe hotel is a very comfortable (and sensibly priced) place to stay. The hotel rooms have been added to the right hand side and above the auditorium. The ground floor foyer remains intact giving access to the restuarant in the former stalls area – with much of the plasterwork retained. The nightclub is on the first floor and the snooker hall on the second. This is the area of greatest interest as, although now a flat floor (on two levels from approximately the level of the rear of the balcony, stepped down about halfway down the auditorium) it retains all of its very elborate plasterwork on the barrel vaulted and segmented roof and side walls. It is in immaculate condition.

There is also a full fly tower on the De Luxe (now also partially converted to bedrooms) which has unfortunately resulted in the proscenium arch being filled in.

Exterior as a hotel
View link

Interior, a part of the building in use as a snooker hall
View link

Recent exterior photo, after repair works on the exterior, is at

To modify the comment above, the exterior vaguely Egyptian / Art Deco look, partly retained today, is the product of a remodeling which dates from 1934.

Photos of the exterior
View link

On a visit to Dublin in August 2014 I noted that the building is shuttered and apparently closed. See my photograph.