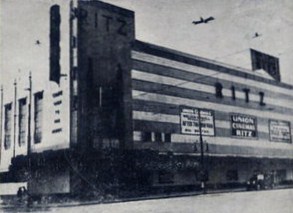 Built and operated by the Union Cinemas chain, the Ritz Cinema opened at Fisherwick Place in Belfast on 9th November 1936 with Gracie Fields attending the opening in person to launch the cinema with her film “Queen of Hearts”. It was a massive building in elegant Art Deco style seating 2,219.

The Ritz Cinema was early on given the nickname of “Ireland’s Wonder Cinema”. Besides a Compton 4Manual/10Rank (with Melotone attached) theatre organ and a cafe on the first floor, the Ritz Cinema featured live entertainment in addition to films, including a performance by The Beatles in 1963. It also had a restaurant which extended the width of the cinema behind the circle and this was also equipped with a maple floor, suitable for dancing.

Associated British Cinemas(ABC) circuit bought out Union Cinemas in 1938, and the cinema became known as the ABC from 1963. It was closed on 22nd September 1977 after an arson attack by fire bombs completely gutted the auditorium and the roof.

The Ritz Cinema was equipped with a Compton 4Manual/10Ranks (with Melotone) theatre organ which was opened by Harold Ramsey. The opening date was 9th November 1936 and appearing on stage that night were Gracie Fields and Jack Hylton and his Band.

The architect Leslie H. Kemp was the main architect who worked in collaboration with E.F. Tulley & J.H. Lundy. The building was planned by the Lou Morris chain, but was taken over during construction by Union Cinemas. Union were taken over by Associated british Cinemas (ABC) in October 1937.

It continued with the Ritz name until 1963 when it was renamed ABC. It was closed on 22nd September 1977 when it was the victim of an arson attack by fire bombs. It eventually re-opened in 1981 as a 4-screen Cannon Cinema which was closed on 1st July 1993.

Hello! I’m trying to recall which cinema in downtown Belfast screened “Mississippi Burning” in 1989? Does anyone remember if it was The Cannon or The Curzon or the university? This is research for a book. I pay in pints! :)

Following conversion to a 4-screen, it reopened as the ABC Film Centre on 19 June 1980 (not 1981). When it was taken over by Cannon in 1986, it was rebranded as the Cannon Film Centre. When it closed in July 1993, it was replaced at the same time by the MGM 10-screen on the Dublin Road, barely 5 minutes walking distance from the old cinema.

Me and my big bro went to this cinema in the 80’s. I just recall watching one film labyrinth starring jennifer Connolly oh and the late david bowie r.i.p. I remember the kiosk it was as dark as the cinema. And something I have not seen since, the staff going down the isles with ice cream then they stood there for awhile. Happy memories. Oh rest in piece dad (alfie).