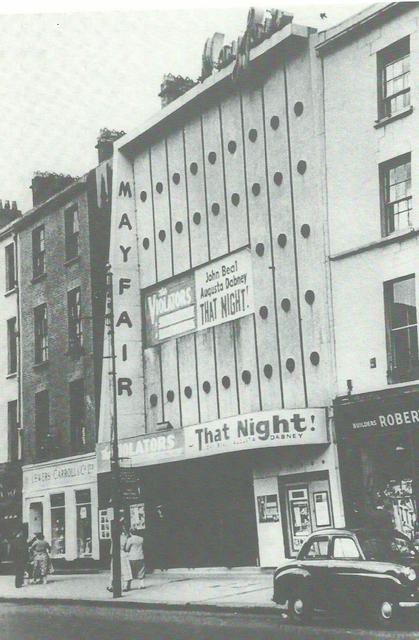 Named after Lord Kelvin, the Kelvin Picture Palace opened on 20 December 1910 in a converted house previously occupied by the noted scientist. In the 1930’s it changed its name quite rapidly:by 1934 to Kelvin Picture House, by 1939 to Kelvin Cinema and on 28th September 1942 to New Kelvin Cinema.

On 18th March 1946 it became the Mayfair Cinema and closed in April 1958. It re-opened on 20th December 1958 as the News & Cartoon Cinema. This gave it its best period of success, with one hour programmes aimed at passengers killing time while waiting for a train at the Great Northern Station and those with a liking for cartoons. The cinema (which became the Classic Cinema on 7th November 1966) remained in operation as the Classic Cinema until it was destroyed by a car bomb on 31st December 1971. The bomb appears to have been directly targeted at the adjoining Kensington Hotel, but it also took out the side wall of the cinema.

The Kelvin, having been taken over by British film producer Raymond Stross and undergone a complete refurbishment and upgrade of its facilities, became the New Kelvin on 28 September 1942. The war having ended, even more radical changes followed, including a new frontage and canopy; from 18 March 1946 it became the Mayfair (still Raymond Stross Theatres, Shaftesbury Avenue, London but later Mayfair Theatres Ireland). The Mayfair closed down in April 1958 but later that year (by 20 December), the News & Cartoon cinema (operated by Capitol & Provincial News Theatres) replaced it. In 1966 the Capitol & Provincial chain was taken over by Classic Cinemas, headquartered in London’s Baker Street, and so the cinema became the Classic (a name it retained until its closure) on 7 November 1966.