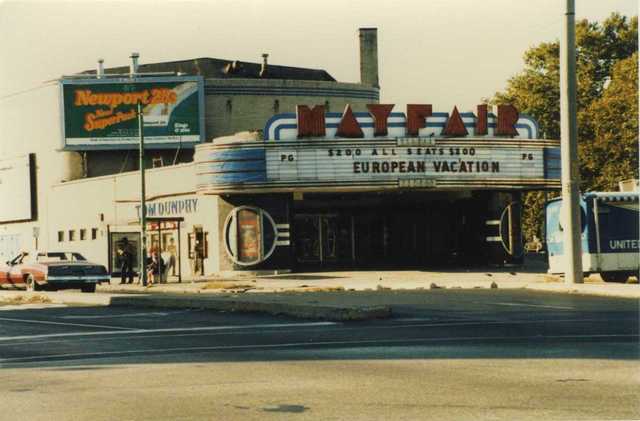 The Mayfair Theatre opened on November 11, 1936 with “Road to Glory”. It was named for the neighborhood in which it was located, with seating for 1,009. The theatre was designed by Philadelphia architect David Supowitz in the Art Deco style known as Streamline Moderne.

There was a mural on both side walls of the auditorium.

Originally, the theatre featured live stage shows and subsequent run movies but by 1940 went to movies only. By 1950, it went to a double features policy. Later the theatre alternated between single and double features. The Mayfair Theatre closed in 1985. It was later converted into a drugstore. In 2006, it became a bank.

Assuming you’re referring to FRIDAY THE 13TH, PART II, I believe the scene you’re describing is preceded by that great scene where Kirsten Baker decides to go for a bit of after-dark skinny dipping. It was very good — and tasteful — direction involved in the filming of that I have to say. But then I feel they totally ruined that great film work when suddenly stupid Jason is introduced to the scene.

Which got me to thinking…..

Going back to Mayfair and how it was in that early ‘80s era, just suppose they took that same movie, fully removed Jason and all the slasher scenes all throughout it, so that it just became a film about young people enjoying a really great stay out at Crystal Lake, and retitled the movie “Fun Times at Crystal Lake,” or whatever. How would the community standards at that time have reacted? My hunch is there would’ve been communuty outrage from here to Kingdom Come, no end to it, and the Philadelphia vice squad would’ve rushed in and shut the Mayfair Theatre down immediately.

But by its being a slasher film it was, oh, no problem; all such “promiscuity out in nature” scenes were fine just so long as you added Jason or whatever to the mix. Making it, “Nothing to get upset with, folks.” Or at least that’s how it all seems to me as I now look back. I wasn’t much around Northeast Philadelphia during those years, and it’s only dawning on me now that that was probably a major reason why.

In contrast to the slasher flicks of the ‘80s, as a child growing up in Northeast Philly, I, too, remember really loving the monster movies, quite a few which I saw at the Mayfair, Merben and so on. But they were a lot different than the '80s slasher films, for not only did they know where to draw the line when it came to showing gore, but they also didn’t try to twist around what was good and evil. Though it wasn’t exactly a slasher flick, on one of my stops back to Northeast Philadelphia during that era I saw DEAD AND BURIED (at the Tyson, I believe, or maybe it was the Crest), and the whole entire film, with its ultra-graphic scenes, was just pointlessly sick. Yet there were some really weird people in the audience that night just hanging on every scene. And I think that might’ve marked the turning point for the popularity of horror flicks in NE Philly, I’m not sure. I know that one film certainly ruined the career of its star, James Farentino, and was an embarrassing last film for Jack Albertson right before his death. But then things turned for the better. On another visit back I saw RAIDERS OF THE LOST ARK at the Devon, and it was mobbed, huge long lines to see it — as if to say Northeast Philadelphia audiences were starved for great movies once more. And that was very reassuring. But then what happened to Northeast Philadelphia theaters after that I don’t know because I wasn’t around. On my next return, all the great theaters — the Mayfair most notably — were shut down…

No, it was definitely the original Friday the 13th. Adrienne King was the girl in the canoe. I never saw any of the subsequent Friday the 13th movies.

I think the girl in the canoe scene was in each of the first two films (it was definitely the end of the first film); in Part II, the makers may have repeated that scene (turning it into a dream?)… anyway, I sort of liked Dead & Buried (though it was very disturbing); Albertson’s undertaker character fascinated me and the “shock” ending was pretty cool too… high budget flick Dead & Buried was indeed… very creepy and atmospheric film but maybe a little too brutal…. I saw Dead & Buried at the Orleans….

I’d completely forgotten till now, but you’re absolutely right, there was a canoe scene in the first FRIDAY THE 13TH as well. And it, too, was preceded by an after-dark skinny dip scene. as I recall. Since I saw both films on cable and not at a theater, also FRIDAY THE 13TH, PART III, and it was so very long ago, it’s easy to forget a lot. So I guess it’s to the credit of the makers of the second one that all these many years later I still remember the great skinny dip scene with Norwegian beauty Kirsten Baker. And even with my not having seen it at an actual theater at that!

As for DEAD & BURIED, there were brutal scenes in it which clearly were intended to appeal to the most criminal-minded, and that was their ONLY intent. For the most part it was a snuff film through and through, with the filmmakers going all out to ensure the highest degree of medical accuracy — such as to show what it would actually look like if a person is unwillingly pinned to the floor and acid is passed through tubes shoved deep up into their nostrils. While certainly its filmmakers achieved their minor goal of horrifying some with that scene and others, their major goal of making happy the most perverse among us is what stands out most about that particular film. For rather than horrifying such people, you could see how certain audience members in the theater that night were totally feeding on it; it was their own special brand of pornography. They didn’t come to that theater to be shocked and entertainingly horrified, but rather, titilated. And totally fairly, I feel, the film’s two biggest stars — Farentino and Albertson — got harshly criticized for it. Did they know what they were signing up for when they made that film? Who knows? In Albertson’s case he passed away soon afterward, so in his case the fact that he made DEAD & BURIED could be greatly downplayed and the highpoints of his vareer played up in his obituary. Farentino wasn’t quite as lucky. Pity, too, because he had such a great career leading up to then and with a lot of shelf-life still left…only for it all to fizzle out with his being brought up on cocaine charges and arrested for stalking Tina Sinatra not long after that. And who today remembers he also did great films such as EL CID and THE PAD AND HOW TO USE IT?

Getting back to the Mayfair, I saw Alfred Hitchcock’s THE BIRDS there back in the mid ‘60s, and I’ll always remember the calm of my friends and I as we were walking back home up Frankford Avenue right afterwards —– “calm” that is, until the most innocent looking little tiny sparrow swooped in close across our path. With our minds still back at the theater watching that film, on cue, all of us jumped back away from that tiny little bird in shear terror — only to then just as quickly catch ourselves, at which point all of us laughed, the transition of coming back from fantasy to reality….and a great tribute to the power of Hitchcock and the Mayfair Theatre combined!

Google search exactly the words “Boxoffice May 29, 1937” and when the issue appears, type in the search box “Philadelphia” and eventually you will see an exterior photo of the Mayfair in all its original glory.

The search is a bit tricky, but the pic of the Mayfair on page 31 is worth it. The link is View link

Here we go again! Cinema Treasures is a site about movie theatres, not “Friday the 13th” and/or slasher flicks and body parts. Stay on-topic!