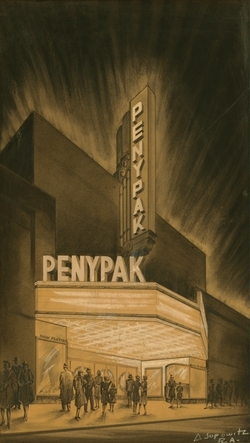 The Holme Theatre, designed by William H. Lee opening on October 11, 1929 with Arthur Lake in “On With the Show” and Raymond McKee in “Look Out Below”. It was an Art Deco style movie house that could seat 1,364. The theatre stood on Frankford Avenue near Rhawn Street. It was operated by Warner-Equity Theatres. It was equipped with an United States organ. It was closed for refurbishment on January 8, 1942 and reopened on March 17, 1942 as the renamed Penypak Theatre (after nearby Penypack Park). The reopening movie was Kay Kyser in “The Playmates”. It was closed on September 27, 1951 with Mario Lanza in “The Great Caruso”. It became an auction house in 1951, which closed in 1954.

It reopened on May 8, 1955 with James Mason in 20,000 Leagues Under the Sea" & Marlon Brando in “Desiree”. It was closed on October 30, 1955 with Anne Appleton in “The Desperate Women” & Richard Coogan in “Girl on the Run”. It again served briefly as an auction house. In 1959 it became a live theatre for the Penypak Players, but this closed after three months. In 1962 it was sold to a furniture store. Since then a number of businesses have used it, and in 2015 it is a Pizza Hut (now a Boston Market) in the lobby area and a Dollar Tree store (now Dollar General) in the auditorium.

Did it look the 1928 Art Deco marquee at Boyd, or the later 1953 version that’s still mostly there? www.FriendsOfTheBoyd.org and visit photo gallery’s Exterior gallery?

Howard, the marquee that’s currently on the Holme Theatre is triangular — that is, it has two faces, both of which are at a slight angle to one another — and trust me, it is not the original marquee by any means. Meantime, even though I never got to experience the Holme when it still was open as a theater, that’s not to say I have no memories of it when it was a theater building. Having been renamed the Pennypack during its last years as a theater, I have good memories of when it was the Pennypack Theatre all boarded up, and by that point the triangular marquee was in place of the original rectangular one. My guess is they were attempting to make the theater look more modern among other things. I also remember the title that was on the marquee (perhaps missing a letter or two), it was “The White Sheep.” And that title remained there until the building was eventually reopened as other than a theater. Now interesting to note, right next door to the Holme Theatre building (where the lower half of the parking lot is today) had been Holme Drug Store, and looking at that one and only photo of when the Holme Theatre was in full swing (taken 1935 or so) it appears to me that when the Holme Theatre changed its name to Pennypack, the Holme Drug Store next door got the original Holme Theatre sign. Meantime, as for the Holme Theatre’s original marquee, going by that 1930s photo it looks like it doubled as an outdoor balcony of sorts. Hence explaining those doorway like formations in the original Art Deco upper part of the theater’s front exterior — which is still intact today (though the doorway formations have long been sealed up.)

When this theater was in its prime (when that 1930s photo was taken) Holmesburg had been involved in bootlegging activity during Prohibition. This I know, because my father grew up in a house somewhere along Frankford Avenue, and he remembered looking out the bedroom window late at night to hear muffled voices in an alleyway running behind the yards, and seeing shadowy figures and cars back there, and boxes of contraband being moved from one vehicle to another via flashlight. And then the cars would part their separate way. And just to show how little times have changed since then, back last October, when I attended the Holmesburg Civic Association meeting and it was the very first time I suggested the old Holme Theatre building be brought back as a neighbrhood movie theater again, the MAIN topic of that meeting that night was all the unsavory criminal activity (most of it illegal drug trafficking) going on in the historic old African American community that’s right behind the Holme Theatre building. The African Americans who live back there — and who are all very decent people, by the way — don’t want any part of that illegal drug scene but are forced to accept it anyway because they’re black in an area that when Rizzo came to power as Mayor in 1971 was mistakenly forced into becoming predominantly blue collar white and has been forced to be ever since. Today, however, it’s on its last leg with Councilwoman Joan Krajewski soon to be retiring, she being the last leftover up here from the Rizzo era. Which is why I’ve been saying all along that turning the old Holme Theatre building into a mini mall is a mistake. I was just trying to help the new owners from losing their shirts is all. At the same time, and this I didn’t know when I first came forth with the restoring it as a theater idea last autumn, it’s not quite time yet to make it a theater again. I was on the right track with that idea, but too much the early bird as it were. And as luck would have it I got the worm, to which I can only say “Yuck!!!”

Anyway, right now Holmesburg’s in that very in-between period, and I can’t invest, and I can’t sway other investors I’m teamed up with to invest, until the smoke finally clears on that. And the gambling that’s coming to Philadelphia is going to really muck things up both on my end and yours, Howard. Though on my end not quite as much as yours, since no slots parlors have been proposed for up here. But we do have this nuisance thing called the Independence Pointe development proposal (which isn’t far from the Holme Theatre building) to worry about. And that’s gotta be taken by the horns and steered the right way somehow. And it ain’t easy when those in charge of it, including U.S. Representative Allyson Schwartz, have I.Q.s something like -3. But she’ll be gone after next November, so I’m not too put off by that, just so long as we can keep the Independence Pointe proposal stalled till then. And so far so good on that.

Right now much of Holmesburg’s future fate hangs on Independence Pointe and its getting developed the right way. And that right way could be one of two things — either its returning to be a riverside shipping terminal (which is what it was last) or developed with housing and other things in such a way so that the end result isn’t a Katrina/Love Canal disaster combined. And likewise the Holme Theatre building’s future fate hangs on how Independence Pointe gets developed. And with Independence Pointe’s future fate on hold for now, so, too, is the Holme Theatre building’s, which is why the Holme Theatre building is being allowed to serve as a mini mall for now. And the upcoming election between Schwartz and Bhakta (November 2006) has a great deal to do with things as well. Schwartz (who’s the incumbant) fully supports the current plan for Independence Pointe, which will end up being a Katrina/Love Canal disaster when all is said and done, whereby Bhakta is a candidate of real substance and vision. Bhakta actually thinks.

Here are two interesting views from the Philadelphia Architects & Buildings site. The first is an architectural rendering. Note the different spelling. The second is a 1941 photo from the Irvin Glazer collection:
http://tinyurl.com/2ubcn5
http://tinyurl.com/33hksc

Thanks for providing the two links, Ken MC, while I’d be curious to know if that was the spelling used on the actual marquee. With my only memories being of when it was all boarded up back in the late ‘50s, I don’t recall the name “Pennypack” being alternatively spelled that way. [but of course I wouldn’t, since it was before I’d learned to read yet.] Meantime, to date I have yet to uncover any photo showing it after it went from being the Holme. Local businessman/Holmesburg native Rudy Definis published a book of historic Holmesburg which went on sale in December 2007, but even there it shows the theater only when it was the Holme. I’d love to see how it looked during the post-WWII optimism phase and with the new name given.

Yes, that’s so typical of how it is around there now. It’s the current state of the Philadelphia economy, what more can I say?

Glad to see so much interest in my favorite movie theatre. However, in the comments I’ve seen the name is spelled incorrectly. The marquee said PENYPAK – not Pennypack.

I have fond memories of the Saturday afternoon shows – especially the comedy races. Each kid got a ticket numbered one thru 10 and if your number was the winner of the race, you got a prize.

Also had some good times as a young teenager at Herby’s Auction which I believe was the first business enterprise after the movie house closed.

Compare this view to the photos of the facade in January 2006:
http://tinyurl.com/nywfjx

Glad to see that J.G. Caughie, who lived in Holmesburg, remembers that the marquee read PENYPAK – not Pennypack. Thanks!

Warner-Equity Theatres launched the new Holme Theatre with sound pictures on October 11, 1929 with “On With the Show” supported by “Look Out Below.” The theatre was named after Thomas Holme and was in the Holemsburg neighborhood of Philly. The Holme closed after the January 8, 1942 showing of “Hold That Ghost” for a major $100,000 refresh. On March 17, 1942, it was relaunched as the Penypak Theatre with Kay Kyser in “The Playmates.”

The Penypak scuffled in the 1950s along with many neighborhood movie houses. In 1950, the independent operator, Melvin Fox, sued the eight major Hollywood distributors citing a cartel that didn’t allow it access to key first run films. That and similar suits at that time around the country led to the Paramount decree that would break up the cartel. The Penypak Theatre initially closed at the expiry of a leasing period on September 27, 1951 with “The Great Caruso.” The former Penypak became the short-lived Herby’s Auction House. A boy got his hand stuck in the Penypak popcorn machine during an auction requiring rescue by the fire department. The auction house closed early in 1954 with the building offered for sale.

The Penypak re-emerged on a grind policy by Mr. Fox on May 8, 1955 with “20,000 Leagues Under the Sea” and “Desiree.” The venue had a new 40' screen and widescreen projection to present CinemaScope titles. But the Penypak’s audience loss was not stemmed and it soon cased operations on October 30, 1955 with Anne Appleton in the exploitation film, “The Desperate Women,” supported by Richard Coogan in “Girl on the Run” ending the venue’s cinematic journey.

After being offered for sale without a buyer, the theatre was auctioned off on July 12, 1956 for $70,000. It resumed auction services for a short period. In 1959, it was a showplace with live plays by the Pinypak players. That only lasted three months closing just prior the theater’s 30th Anniversary. The building was again sold in 1962 for $52,500 to a furniture retailer beginning a long retail career.