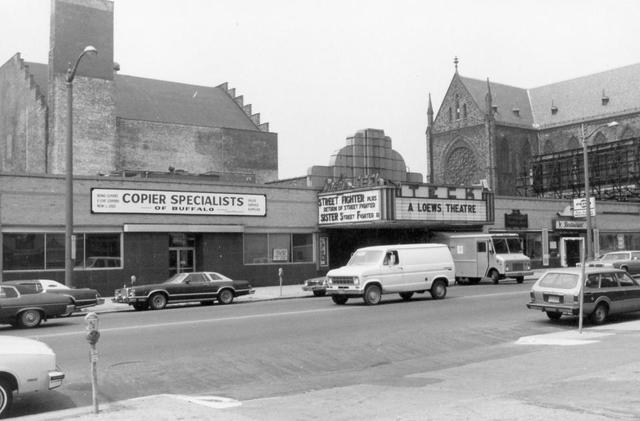 Built as the Music Hall in 1887, it was designed in a Romanesque Revival style by architect Richard Alfred Waite. It was remodeled in 1946 as Shea’s Teck Theatre to the designs of architect B. Frank Kelly. It was converted for 3-projector Cinerama in the 1950’s and ran all films made in that format (both 3 projector and single projector) until the Cinerama era was over. Subsequently it ran “normal” films on the curved screen leftover from “single projector” Cinerama.

The theatre was demolished in the aftermath of the destruction of Buffalo, N.Y. Main Street during the disastrous building of a subway system. Because of the extended construction public access to that and other historic downtown Buffalo theatres was totally cut off causing their bankruptcy and forcing the theatre going public to attend films in suburban multiplexes.

The lot where the Teck Theatre stood is currently empty and covered with weeds.

If my memory serves me,during the 70’s the Teck was having trouble getting first run films because the distributors were playing them in the suburban plexes.
The Teck began showing B movies, R rated adult films, and martial arts films.

I got to explore and photograph the Teck in the late 1970’s. There was a huge attic space above the ceiling with ghost outlines on the walls where the balcony had been and bits of surviving decorative plaster that escaped the 1945 gutting of the building. The Cenarama booths on the sides of the theatre were quite far down the auditorium to get the throw correctly to the sides of the screen with flat windows at an angle to the sidewalls. As a Cinerama theatre it must have had a very tunnel like effect for the rear of the auditorium. The place was pretty dirty as well with a lot of air handling dust on the walls and ceiling.

Would you still have those photos and be willing to share? I would love to see those? Thanks!

I have a promotional postcard of the Cinerama film “Search For Paradise”. The back of the postcard states: TECK THEATRE 760 Main Street Buffalo 2, N.Y. MOhawk 4628 Exclusive Buffalo Home of CINERAMA I remember when the Main Street businesses were expropriated and torn down. I took pictures of the theatres (Century, Cinema) including one of the Teck marquee and entrance (similar to the Josker photo).

Known as Leow’s tech, in the 70s it showed all the 2nd- run movies. It also regularly had all the martial arts films of the day, including Bruce Lee and Sonny Chiba (Street Fighter). It was $2 admission and the movies would play back to back all day. Spent a lot of hours there.

When Cinerama departed the Teck theatre standard 35mm and 70mm movies such as West Side Story and Ben-Hur were definitely shown on a flat screen. I was also fortunate enough to get to see genuine Cinerama films before the equipment was removed from the theatre.

For a while when “Cinerama” was single projector 70mm (think ‘It’s a Mad Mad Mad Mad World’) they also ran standard 35mm scope on the curved screen. Saw Elvis in ‘Viva Las Vegas’ like that and it actually looked pretty good!

Scroll down to the second illustration on this web page to see the original appearance of the Music Hall, as it was called from its opening in 1887 until 1900. The massive Romanesque Revival pile was designed by Richard Alfred Waite.

This page has a photo of the auditorium as originally designed, strikingly different from the Streamline Modern interior created in its 1946 rebuilding as Shea’s Teck Theatre (which, according to this earlier comment by roberttoplin, was designed by architect B. Frank Kelly with interiors by Theodore P. Vandercoy.) The building fronting the auditorium was apparently also replaced at that time.

I have lived in buffalo all my life and I do remember this great b film showplace it did turn into a grindhouse cinema where you could smoke downstairs in the lounge beautiful accent mirrors on the walls. snack stand in the middle upstairs sold real beef franks ice cold drinks real butter popcorn and you could stay all day until they closed for the day and only 2dollar admission. great times someone please post photos of inside. thank you

Just added a 1968 picture in the photo section.