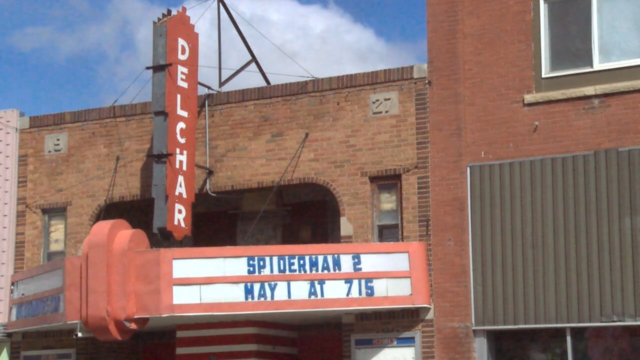 Small town movie theatre in downtown Mayville, located on Main Street between Center Avenue and First Avenue SE. It opened as the Bijou Theatre prior to 1926 and was renamed DelChar Theatre in 1930. Open Friday, Saturday and Sunday with a single show each night at 7:15.

Two story front with a lite colored brick on the upper story and a black tile on the lower part. The box office has a glass block around the bottom portion. It has a small triangular marquee with a small verticle with the name in neon.

The DelChar was initially open prior to 1926 as the Bijou. The name was changed to DelChar in 1930. Their website is

The 1985 NHP nomination form for the Delchar Theatre (PDF here) says that the house opened on February 6, 1928. It was built by Charles M. Tolan, and the name was derived from combining his first name with that of his wife, Della. The form says that Tolan had operated theaters in Mayville since 1917, but doesn’t give names or addresses for any of them.

This PDF has a photo of the Delchar Theatre, apparently taken in 1985 for the NRHP nomination.

The NRHP form uses the -re spelling of the T word, but the theater’s official web site uses the -er spelling.

Strange, the Motion Picture Yearbook shows it opening in 1930 as the DelChar. Prior to that it was listed as the Bijou Theatre

NRHP nomination forms do sometimes have mistakes, but the Film Daily Yearbooks have more. This particular NRHP form, prepared by a planning firm in Fargo, cites Traill County assessment and real estate records as well as items published in the local newspapers as early as 1927 as sources, so it looks to be reliable.

The editors of the Yearbooks were not very good at updating their records, unfortunately. The theater in the neighborhood I grew up in was listed in the Yearbook as late as 1963, even though it had been converted into a church at least five years earlier. I’ve also found some cases where a theater didn’t get listed in the Yearbook until some years after it had opened.

The “Circuits” section of the Yearbooks is even more unreliable than the theater listings. I have come across theaters listed under circuits which had vanished from the main theater listings decades earlier.

Film Daily itself was probably more reliable overall than the Yearbooks, but even then you have to be wary of such things as seat counts, which were frequently wrong, and the magazine was loaded with misspellings and typos.