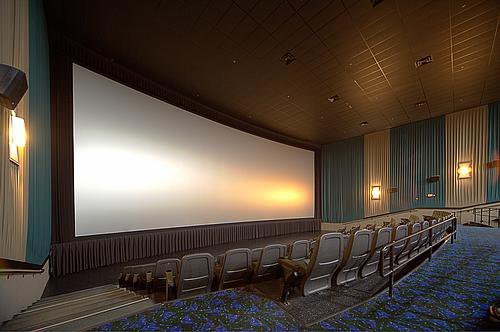 This 14 screen multiplex was opened in 2002 for CEC Theatres. Rounded all glass front looks into an ovesized lobby. Entrance doors on each end of the front lead to the ticket stations. A huge concession area along the back lobby wall . There are columns down the center of the lobby area with hidden neon at the tops that give off a warm glow in the lobby. The auditoriums are confy and the seats match the color co-ordinated auditoriums. A first class theatre for a multiplex.

Will the good people of Fargo be able to see this years nominated films…“Sideways,” “Million Dollar Baby,” etc???

In 2002, this theatre was remodeled into the current 14-screen configuration, but it originally opened much earlier than that with a smaller number of screens. I believe it originally opened in about 1983 with six screens. Several years later (probably in the late-1980s), a three-screen addition was opened and operated semi-separately as a discount house called the West 1-2-3. Eventually, these three screens were incorporated into the main complex, making it a nine-screen multiplex called West Acres 9. The 2002 addition expanded it to the current 14 screens while also creating a new (and much larger) lobby, entrance, and concessions area.

A pretty good theater, now run by Marcus Cinema. Went there about 6 months ago with a friend on her birthday. These kids disturbed our showing, so management gave us free passes. Those were even good at the Century across town. Since they are both Marcus theaters, sometimes on theater plays a film the other doesn’t.

This theatre has an UltraScreen auditorium with DreamLounger reclining leather seats.