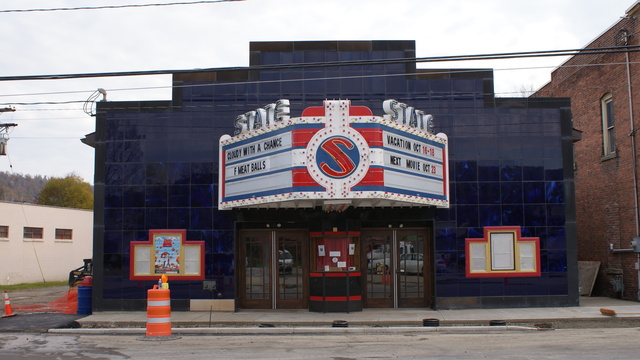 The State Theatre was built in 1937, designed by architect H.L. Beebe in Art Moderne style. The facade was faced with Vitrolite tiles, and the triangle-shaped marquee lit with neon and lightbulbs.

The single-screen State Theatre is today home to the Deposit Community Theatre and Performing Arts Center, and in addition to live presentations, still screens first-run movies.

The photo from 2009 was taken before the sidewalk renovation last summer. The sidewalks in front of the theatre look really nice now. Also, if you still haven’t any photos from the interior, let me know, I’ll see if I can get some.

the roof of the STATE THEATRE collapsed just hours after the last feature was over.City inspector,Herbert Smith thinks heavy snowfall could brought the roof down.Harry Nichols the owner of the STATE said the theatre was inspected a year ago by the insurance company that insures it.$50.000 damage to the theatre.The STATE Was built in the 30’s as a garage by 1939 it was a movie house.I know this was posted earlier,but i Put a few names in the story.

The exterior is a material called Vitrolite.

If anyone would like some interior photos (2011) of the State Theater in Deposit, let me know and I will e-mail them to you.

Was this a Kallet house at one time?

I love the vitrolite that is still on the art deco exterior of this theatre!

I had my first date at the State Theatre. The movie was “Little Big Man”.

The State Theatre was opened in 1937 as part of the Kallet Theatres chain. It has been operating continuously since then, except of a one year closure from September 1994 due to fire damage, after which the interior was almost completely rebuilt. There was also a brief closure in 2006 due to flood damage. The theatre’s status was changed to non-profit in March of 1987, and it is now owned by the Town of Deposit. The theatre held a successful fund drive for a digital projection upgrade, this was installed in September 2013. As of 10/13 there are still funds left over that will be used for audio/visual upgrades and marquee renovation. 10/13 exterior shot added to the photo page.

MarkNYLA: Very good news! Hope to visit this theatre next Spring or Summer as the exterior looks like black carerra glass or vitrolite.

MarkNYLA: Everything is correct except who owns the theatre. It is actually owned by The Deposit Community Theatre and Performing Arts Center Inc. and it’s name technically is that as well. However, it is still known by many as the State Theater.