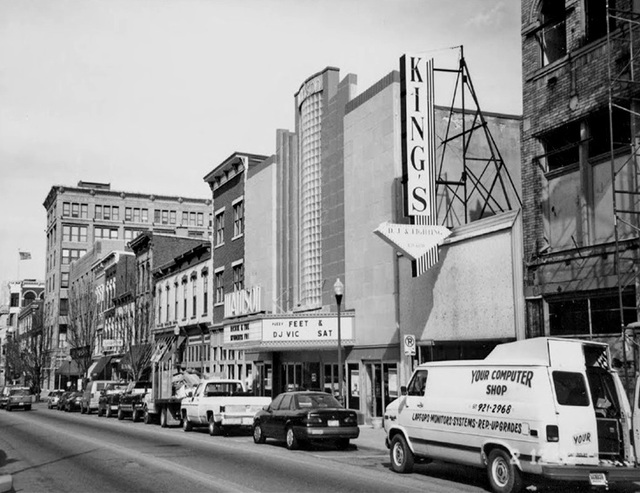 Located in the heart of Covington’s Renaissance District. The Madison Theater offers a variety of live music, comedy, sports and film events. After a three million dollar restoration and renovation the theater re-opened in 2001 on New Year’s Eve. It boasts state of the art sound and lighting and has two fully retractable screens.

Opened as the Lyric Theater in 1912, it was later renamed L.B. Wilson Theater, then Madison Theater. It suffered a fire in 1944, and was rebuilt in 1946 to the plans of F & Y Building Service.

A good time was had by all at the recent Bob Weir and Ratdog show at the Madison. Caution: Mr. Dog seems to be encouraging you to perform some illegal activity while listening to his music.
http://tinyurl.com/5qq9cx

This is a picture of the Lyric, which eventually became the Wilson, then the Madison.
http://www.nkyviews.com/kenton/kenton319.htm

Boxoffice contradicts itself. The issue of January 5, 1946, said this: “The inclement weather has delayed work on the rebuilding of the Madison Theatre in Covington, Ky., gutted by fire several months ago.”

Then the March 16, 1946, issue says this: “The Madison Theatre, Covington, Ky., which is being completely rebuilt after total destruction by fire, is now 70 percent completed.”

Gutted, or completely destroyed? You decide.

But while Boxoffice apparently couldn’t be bothered to report on the fire itself (at least I’ve been unable to find such an item,) a renovation of the Madison more than two decades later rated three photos in the November 20, 1967, issue.

Nice photo of a great looking theatre.Covington should proud to have it on main street.

A photo of the auditorium of the Madison Theatre illustrated an ad for Thortel Fireproof Fabrics in Boxoffice of March 29, 1947.

L.B. Wilson was my great-grandfather’s brother.

The three photos of the Madison in the November 20, 1967, issue of Boxoffice can now be seen at this link.

The 1947 photo of the auditorium is in the Thortel fabrics ad on this page of Boxoffice.

The Lyric was operated for most of the 1920s by Godfrey Kotzin. L. B. Wilson bought the house in 1927. The news was published in the November 22 issue of the Kentucky Post, but I can’t find it online.