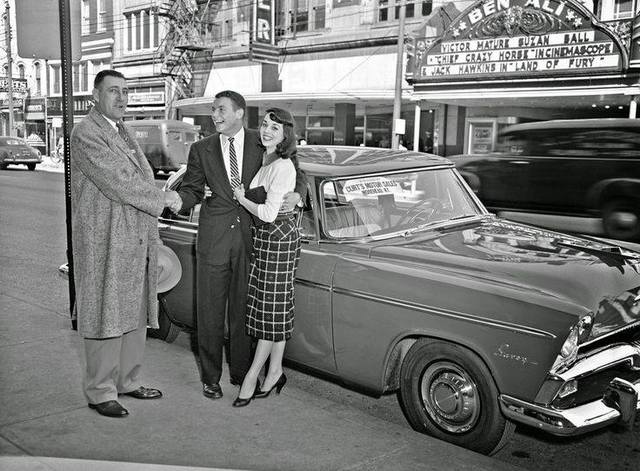 The Ben Ali Theatre opened on September 23, 1913 with the play “The Passing Show of 1912”. It was built by (and named for) a prominent area businessman, James Ben Ali Haggin. The Ben Ali Theatre was originally designed for legitimate theatre, but within two years of its opening, had become primarily a movie house. By 1941 it was operated by the Schine Circuit. The theatre was closed and torn down in 1965, replaced by a parking lot.

The front of the Ben Ali Theatre can be seen at the right in this photo dating from the 1940s. The movie “Barbary Coast Gent” was released in 1944, according to IMDb.

Here is a 1942 photo taken at the premier of the film “A Yank On the Burma Road”.

This PDF file (3.7MB) containing photos of historic buildings in Lexington includes a small photo of the Ben Ali Theatre, but is interesting mostly for the information that the interior of the house was designed by the Tiffany Studios in New York City. Given the fact that Tiffany Studios designed in the Art Nouveau style well into the 20th century, it seems quite likely that this was the interior style chosen for the Ben Ali Theatre. Unfortunately, I’ve been unable to find any interior photos of the theater to confirm this surmise.

The Ben Ali Theatre suffered a destructive fire in 1916, and a lawsuit over the insurance claim resulted. The suit was covered in a 1922 book published by the Lawyers Co-Operative Publishing Company, and its report revealed that the theater auditorium had been built behind an existing building. The entrance building looks to date from the late 19th century, judging from its architectural style. This appears to be a hybrid of the Romanesque Revival, popular in commercial and institutional buildings of the 1880s and 1890s, and the Queen Anne style, which was popular mostly for residential construction at about the same time.

Here is another photo, this from the later 1940s. It is dominated by the larger building which stood next door, but a fairly good view of the theater can be seen at far right. This photo best reveals the architectural style of the facade.

Lexington has long been one of the most preservation-conscious cities in the United States (and one of very few that chose not to eviscerate its downtown with a freeway) so it is especially unfortunate that this historic theater was lost.

Thanks so much for all the information on the Ben Ali Theater. I host estate sales in the Lexington area and am selling several items from the Ben Ali Theater – plaster head of a lady, plaster happy/sad theatrical masks and some very unique exit-type signs. The family says that these items were retrieved from the building prior to it being demolished. The head is being sold in an online auction now. The other items will be in a physical estate sale being held May 18-19. If you know anyone that might be interested in these items, please share my website with them, so they can get more information about the auction and the sale – look from the Greenbrier Top Picks and Greenbrier Estate Sale along the right side of the page. Also, if anyone has any interior pictures of the Ben Ali, I would love to see them. Wish I could figure out what part of the theater the plaster pieces came from.

One entered the theatre from Main Street. The Ben Ali had a long walkway leading up to auditorium area, similar to that of the New Amsterdam Theatre in New York City. The supports for the balconies were position so that they would not interfere with the view onstage or the screen. All main floor seats were in front of the pillars supporting the balconies. The boxes on either side had been removed. It was reviewed as a great tragedy when the theatre was closed and demolished. The only thing that remains is one wall of the stage which stands on the property of the business on the Main Street side. The owner was angry over the theatre being destroyed and wouldn’t let them tear it down. I went to last showing of the theatre. It was a double feature. The films were, and it was an unusal pairing, FROM RUSSIA WITH LOVE and THE PINK PANTHER.

Interior photographs and promotional photographs done in front can be found at the University of Kentucky Special Collections in the Margaret L. King Library building.

It was a wonderful theatre. Special collections has photos of the marquee. I miss that theatre. Anyone who remembers the theatre wishes it was still there. It was torn down just to build a parking garage, which has been torn down now. It was replaced by one of our new courhouses.

Sadly, Lexington has not done a good job of saving its historic structures. A portion of downtown has been destroyed in recent years, parts of which contained some of our most historic buildings. Many people were against it but that was ignored and they came down anyway. Very sad. 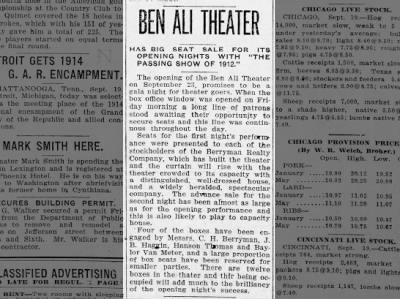