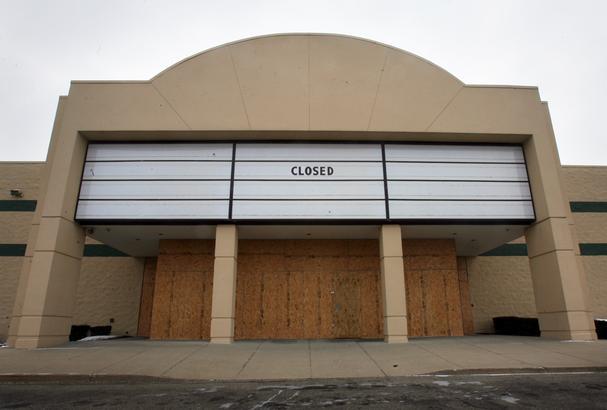 This Danabrry Dollar $aver Cinema was later sold Kerasotes Theatres who showed first run films. It was closed by AMC in November 2010.

RMI,
Hopefully this will be the last DanBarry ‘treasure’ we get cluttering up the site. What is so nice about these megaplexes that you must submit them all? Corporate sprawl is ugly enough in real life, we don’t need it here. For a cinema to be a treasure, it should be architecturally or historically significant, or at least offer a unique ambiance or selection of films. If your only qualification is that it’s a place that shows movies, I’ll submit my living room, which is a lot nicer than these cruddy boxes some people cram the site with. It even serves beer.

In the spectrum of the buisness, these theatres are part of our theatre history. Some day people may look back fondly on them like we do on the Loews Wonder theatres. It’s amazing how many multiplex theatres have been closed and replaced by mega-plexes. I am no fan of these type cinemas but in compiling theatre history the new places are sadly part of the reason many of the older theatres close.

This isn’t a site to chronicle the economic forces behind the movie theater industry, it’s a site specifically to commemorate classic movie theaters. Even aging these monsters 200 years wouldn’t make them worth anything. If in 40 years people form grassroots movements to protest the demolition of a 16 screen cinderblock and drywall box, I’ll admit I was wrong. No one will ever miss these things. Almost none of them look even like anything, which will make replacing one box with another very easy. The days of quality architecture are mostly over (but may return), and quality construction has been priced out of the reach of all but the best-funded projects for 20 years or more. These are essentially disposable buildings.

Seth & Robert if you look at the front of this web site it says “search by number of screens” it goes up 35 screen cinemas. Many 20plex and higher theaters are on this site.
Seth ALSO
in today’s cinema market 10,12 16 and even a 20plex cinema closed last year, the 20plex is for sale and was less than 4years old.
Desert 16 owned by Century Theatres was the first megaplex I saw with the most screens that closed back in 2000.
Also to note DANBARRY DOLLAR $AVER Richmond 10 which was sold to Kerasotes Theatres can be seen at
/theaters/8512/ which it the last of the DanBarry’s chain.

ALSO what if it was like a local theatre were I live. It is was a single theatre that had a balcony which was cut off and made into 4 theatres the main floor in now a triplex the flower shop to the left is a tiny 45 seat theatre and 4 theatres were built to the right so it is a 12plex which did kill a single screen down the street, but this 12plex was acutully built in 40’s so it would be a classic right Seth.
P.S. The single theatre down the street The Crest it did get life again as a bakery at least, the bakery closed last summer after 15 years.

Seth just wanted to add the theatre I talked of in the above in the 70â€™s is when the balcony was then used as a twin the main floor was a single than but the stage was took out and the screen pushed up, so that a small 150 seat theatre would be placed behind the main floor â€˜s screen. Anyways in 1999 when a house was torn down they built the four additional theatres to the right of the building. They at least feature stadium seating and digital sound. Anyway the small theatre was used even after the main floor was triplexed. When the new stadium theatres were added they closed the smaller theatre because the new theatre were built onto the original building and blocked the small theatreâ€™s exit doors. The two building of theatres are connected by entryway between the two theatres. At any rate the owners have always place one sheet cases next to the entry of the theatre that movie was playing in. After the small theatre closed they installed a tacky fence like gate with a lock blocking the entrance hallway to small theatre. I went in the back a few times and looked in the theatre they use now for storage, removing several of the left sideâ€™s seats for space and placing the loose seats in front of the screen .I was amazed that the screen, speakers and projection everything was still intact and no signs of leaks on the ceiling. And yes after what almost 6 years the one sheet of â€œRing Masterâ€ is still in its case and the sign over the door â€œI must admit is missing some lettersâ€ said â€œRing Masterâ€.

SO SETH MY POINT IS CINEMA THEATRE IS A 12PLEX BUT STILL IS AN OLD CLASSIC AND IF YOU ADD THE SMALL THEATRE IN THE BACK OF THE FLOOR THEATRES WHICH LOOKS IN GREAT SHAPE ( JUST NEEDS A EXIT) THIS CLASSIC IS 13 SCREENER.

I AM GLAD YOU LIKE YOUR CAPS KEY. I HAVE ONE TOO. THEY ARE FUN.

Okay, really now; yes, the theater would count as a classic, and you really should list all of this in a quality posting. That’s what almost everyone here is interested in. What it opened as, when it opened, what does it look like (especially since photo submission has been down so long) and any history. Of course the history should continue up to the present, but we need more than one sentence. And if the poster has just presented us with a chain of stunningly dull multiplexes, what are we to think? So do everyone who has never been to Hamilton a favor, and give us some info. And post the Crest if someone hasn’t beaten you to it.

In reading about John Eberson and his son, Drew (inserted below) there was mention of a former Hamilton OH theater called the Jewel which was Eberson’s earliest known conventional theater. And the Jewel is not listed on our cinema site for a theater in Hamilton OH.

“Eberson was born in Cernauti, Bukovina, a region of Romania. He attended high school in Dresden and studied at the University of Vienna in 1893. After escaping from prison (he was incarcerated after a disagreement with a superior officer in his military regiment) Eberson moved to the United States and settled in St. Louis, Missouri. His earliest atmospheric experiments are found in his stage design and painting work between 1901-03 for the Johnston Realty and Construction Company. Eberson’s earliest known conventional theater commission was for the Jewel in Hamilton, Ohio (1909). After moving to Chicago in 1910 he began to receive steady theater design work. While his early commissions could be characterized as traditional, by the mid-1910’s Eberson had clearly forged a new direction with the Austin Majestic (1916) and Dallas Majestic theaters (1917). His first truly Atmospheric Theater, the Houston Majestic, opened in 1923. The Atmospheric Theaters reflected Eberson’s European heritage. Italian influences,especially in statuary and interior motifs. In addition, were landscape and garden influences. Eberson’s theater interiors contained numerous fountains and grottoes.
[Adapted from an exhibition publication of the Bertha and Karl Leubsdorf Art Gallery, Hunter College (1988)]

Pic of the Jewell from Lane Library catalog:

Known in its last months as the Cinema 10, this theater was closed by AMC on November 28, 2010: View link

I shoulg have readthe article a bit more carefully; AMC had renamed the theater the Hamilton 10 before closing it.