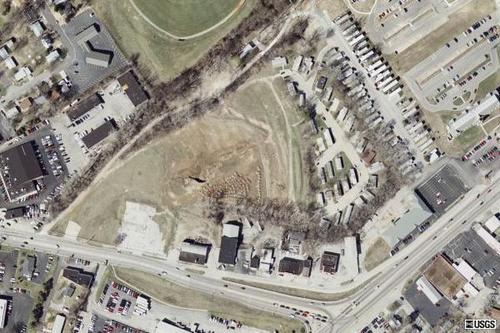 The Plaza Drive-In closed in 1983. The screen has been torn down but the entrance and the box office are still standing.

There is now nothing left of the Plaza Drive-In. Lindenwood College purchased the property and has razed everything so they can add more buildings.

The drive-in opened in July 1951 as the St. Charles Drive-In.

Renamed the Plaza Drive-In in 1959 when Mid-America took over operation.

The address should be 2140 West Clay, not West Clary…

One day a few years ago I took a “tour” of what was left of the concession stand/projection booth. I found in some of the rubble a couple film takeup sprockets from a projector. These became part of a project at work in which I modified a long roll 35mm still camera.
I think I still have one of those spools in my desk somewhere….

You can find quite a few “treasures” in old Theatres.I have a basement full.

In Wehrenberg’s 100th Anniversary book, the Plaza is listed as a theater they operated? Is that true? It had to have been in 1983-84 timeframe and could only have been for a very short time (less than a year), as it closed in either ‘83 or '84.

Let’s just say that was (another) mistake in the Wehrenberg book. My research has shown it was advertised as a Mid-America house from when they took over operation in 1959 (and renamed it the Plaza) until closing night on September 5, 1983.

That’s what I thought, JAlex…I couldn’t remember Wehrenberg ever running that place. Thanks for clearing that up…and thanks for the closing date. That does sound about right.

A slightly blurry picture of the Plaza from 1974 can be seen here: http://www.drive-ins.com/pictures/motplaz001.jpg

The address above is incorrect. This is now Lindenwood’s J. Scheidegger Center For The Arts @ 2300 W. Clay St. St. Charles MO. This points directly to the drive in itself. The address listed is further east.