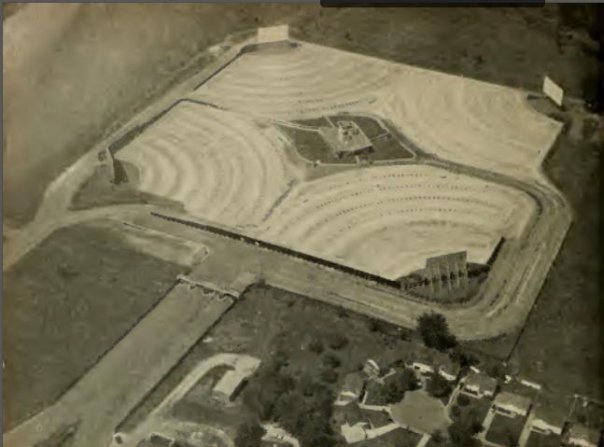 The St. Ann Drive-In opened in June 2, 1951 as a four-screen theatre, and was operated by Arthur Enterprises Inc. It opened with Richard Widmark in “Halls of Montezuma” and had a capacity of 1,000 cars. It was located a few blocks from the Airway Drive-In. The drive-in itself was located in a valley behind retail stores that lined the Rock Road. The only thing visible from the Rock Road was the large marquee and the entrance that led to the theatre. This was the first big multi-screen in the St. Louis area.

When Arthur Enterprises Inc. went bankrupt, Wehrenberg Theatres took over operations of the St. Ann Drive-In, putting it in direct competition with its own Airway Drive-In. The St. Ann Drive-In usually played the same double bill program on two screens leaving you with a choice of two programs.

The drive-in was closed in the 1980’s and was later demolished to make way for the St. Ann Square Shopping Center.

The header says a shopping center.

To be specific, I meant “What stores within the currently standing shopping center is occupying the space now?”

Had to fly all the way home to St. Louis to answer my own question. LOL! It’s a Big Lots and some other stores as well.

Pics (including a spectacular shot of all 4 fields) and ads for this drive-in here: St. Louis Flashback Movie & Drive-In Theatres

1951 photo added courtesy of the Fiftiesville Facebook page. I believe it to be of this theater.

The Oct. 6, 1951 issue of Boxoffice ran a two-page article on the St. Ann, including a rare two-page panorama photo of three of the four screens.

The June 9, 1951 issue of Boxoffice had a lengthy article stating that the St. Ann had opened on June 2. It cost $300,000 and had been under construction for nine months. Lewis Eugene Wilson of Los Angeles was the architect. Two sets of projectors with mirrored lenses served the four screens. The playgrounds included a coal-burning steam train that ran over 1600 feet of track.