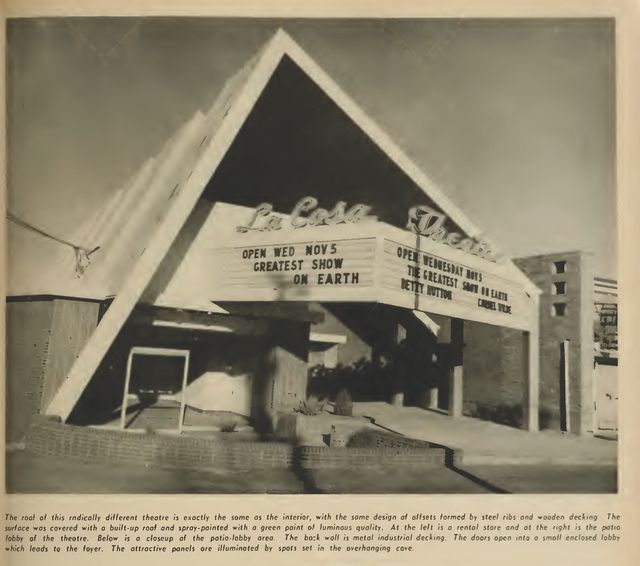 A short-lived suburban St. Louis theatre, the La Cosa Theatre operated from November 1952 until May 1956.

The La Cosa Theatre was unique in the St. Louis-market being an "A-Frame" structure and during construction passers-by started calling it "The Thing" (‘La Cosa’ means ‘the thing’ in Spanish), in reference to the Phil Harris pop-music hit of the time. The screen was over the lobby and back-screen projection was utilized.

The St. Louis County Library bought the structure and converted it to its St. Ann branch until it was struck by a tornado in January 1967.

Hugh Graham was my father. I remember him telling stories about the La Cosa, mostly with sadness from the court action with the IATSE/MPMO local. Ironically, I became a member of that St. Louis union in the early 1980’s. There were a few seasoned projectionists that worked and respected dad, and sponsored me into the union. I’d love to see the original design plans from Lewis E. Wilson, or even some pics of the projection booth. I’ll look through the picture archive I have and will post if I find anything.

The tornado didn’t spell the end of the building. The library remained inside the old La Cosa until the ‘80s or '90s, when a new library was built behind it. Upon completion of its replacement, the La Cosa/library structure was demolished. (So that’s where it was, Chuck; right in front of the site of the present library, just a few feet from the street. I remember it well; it was the library I went to as a kid!)

Darren_Snow – you are right, the tornado did not close the library. My mother was inside when it hit. For a long time they kept the projection equipment and showed kid films on Saturday mornings. I had a good time there.