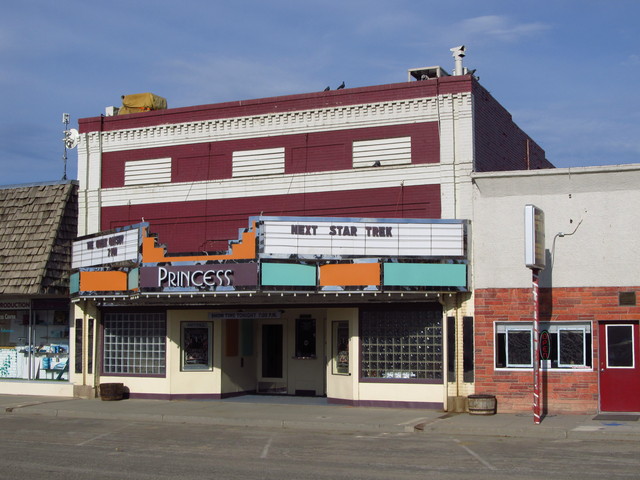 This beautifully restored movie house opened as the Princess Theatre in 1917. It later was renamed Mesa Theatre. On August 2, 1972 it was renamed Carousel Cinema.

In November 2009, new owners took over and the name Princess Theatre was re-instated.

I had the pleasure of attending the Mesa in 1998. The manager / owner was very nice and gave me a top to bottom tour of the property before opening. He was obviously very proud of his place and rightfully so. One odd thing that I noticed was the balcony. Instead of extending forward to the back wall of the downstairs, or even out over the back rows, it stopped short. From the front row of the balcony you could look down into the last 10 feet or so of the lobby before it ended at the rear wall of the auitorium.

In the front was an old stage and very small pit for musicians, and under the screen, old dressing room areas from the days of live shows. Other than that I have nothing to add that is not covered better on the above mentioned website. Wish I had the money to buy it. While Douglas, being in the eastern part of Wyoming, is not in the beautiful Teton area, it looked like a nice place to live. Safe to I’ll bet since the Wyoming State Police Academy is located there. An old drive in theatre just north of town serves as the firing range.

From 2010 a photo of the PrincessTheatre in Douglas.

I have a photo of the old drive-in mentioned in the Stan Malone comment from 2005 above. The shot was taken in 1994, and the concession stand is occupied by a horse. How do we get a new entry listed for that venue?

emckee007 As a child in 1945, I attended Saturday children’s matinees at The Princess(Mesa) Theatre. A cowboy movie, cartoon, popcorn and a coke for only 25 cents. What a wonderful place and time for a 5 year old child!

As listed at http://movie-theatre.org/usa/wy/wyoming.htm the Mesa at some point and time it was operated by Gibraltar Entertainment and later Commonwealth Amusements Corp.

Boxoffice, July 31, 1972: “DOUGLAS, WYO. – James and Patricia O'Neal have taken over the Mesa Theatre here and, as of August 2, will operate the theatre under the new name, the Carousel Cinema.”