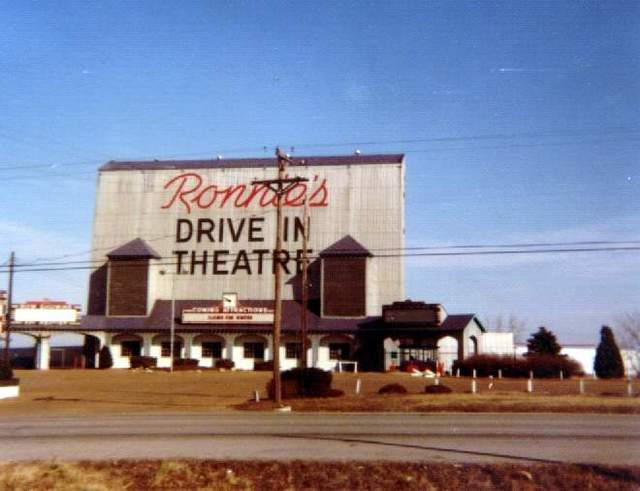 Located in the Sappington/Afton district to the southwest of St. Louis. Opened on July 15, 1948 with June Allyson in “Good News”. It was operated by Wehrenberg Theatres and this was most certainly their flagship drive-in theatre. It was named after their grandson Ron Krueger. The Ronnie’s Drive-In had the largest playground of any of the St. Louis area drive-ins. This was also where the Wehrenberg train was located that took patrons for rides around the drive-in before the start of the show and during intermissions.

The main entrance with the back of the screen facing S. Lindbergh Boulevard was lit up with neon spelling in huge letters Ronnie’s Drive-In. The box offices were all dressed in neon also. The front was landscaped with trees and shrubs. This was always a favorite for the people of South St. Louis.

The Ronnie’s Drive-In came to a sad ending on August 3, 1983 when it closed and the screen was pulled over. It got a lot of local news coverage when the demolition started. It was considered a south side landmark. There is a shopping center where the theatre once stood and Wehrenberg built their largest multiplex on part of where the entrance to the drive-in once stood, naming it Ronnie’s 8 Cine which lasted a short time and was demolished to make way for the much larger Ronnie’s 20 Cine. In keeping with the fame of the Ronnie’s Drive-In, the Ronnie’s 20 Cine has a motif in the lobby of a drive-in theatre.

How can I get a copy of this photo of Ronnie’s Drive In?

TGIF is next to where the entrance stood. The 20 screen indoor theater is to the east of where the concession stand was located.

I may be totally “mis-remembering” but I seem to rememebr seeing concerts at Ronnies’s when I was a little kid… and I swear I think I remember seeing the Rolling Stones there, in like 1964. Am I totally off base?

Indeed, this drive-in site is in Sappington, but that’s just an unincorporated census-designated place in St. Louis County. As jwmovies pointed out, the current indoor Ronnie’s Cinema near the site lists a St. Louis mailing address.

In the photos section, there are two pictures that I took of the former Drive-In marquee as it was being used to advertise what was showing at the Ronnie’s 20 (until a tornado took it out). The Marquee stood directly in front of the screen, with the entrance to the right and the exit to the left. Current businesses in the plaza can be seen in one photo to the east (Ronnie’s 20) and to the west (TGI Fridays).

Boxoffice, June 1, 1957: “A tornado which tore through (southern St. Louis County) late on the afternoon of May 22 did more than $5,000 damage to (Ronnie’s). About 1,000 feet of corrugated metal fence was blown down, some pieces being found 2½ miles away. Some small out buildings were blown down and there was some damage to the screen tower, but the drive-in has been able to continue operations.”