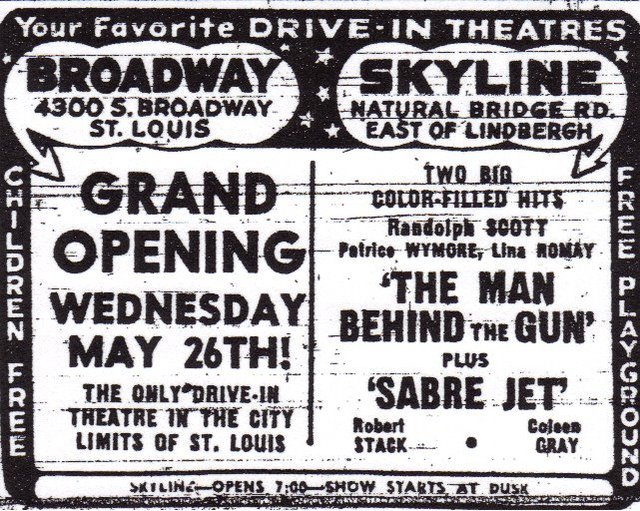 It was located on S. Broadway right next to the City workhouse. (Part of the St. Louis Jail System) Tuesday night was buck night whereby admission was 1 or a carload for $1.00.

The Broadway Drive-In was closed in October 1964 and was demolished to make way for Interstate 55 as it made its way through the city. From the back side of the drive-in you could look out and see the Mississippi River.

A strip shopping center replaced the drive-in and the old city workhouse. It has a Walgreens Drug Store and had a super market that is now a Big Lots Closeout Store.

There are still some stores there, Family Dollar, Subway, Radio Shack, Hardees, etc. The Hollywood/Blockbuster video is out of business. Also a new O'Reilly’s Auto Parts has just been built close to the Big Lots building, which is still unoccupied.

The advertisement above saying opening night will be May 26th does not reflect the minor delay in opening the venue. Actual opening took place on May 30th, 1954 with a double-bill of “Return to Paradise” and “99 River Street.”

Architectural credit was given to James L. Willingham & Associates.

May 30th, 1954 grand opening ad in the photo section. It has a aerial drawing of the drive-in.

The victim of eminent domain. I-55 cut right through where the screen and the east field of the drive-in was.

Starting in December 1954 and continuing for at least a year, the Broadway hosted a shuttle for folks who wanted to park there and shop downtown. It cost 10 cents to park, 35 cents for the round-trip fare.

The Oct. 4, 1961 St. Louis Post-Dispatch said that A. Ray Parker, mayor of Brentwood, “divides his working day between the mayor’s job and management of an outdoor motion picture theater which he owns”. He had headed six corporations owning movie theaters, but only one was active at the time of the article, presumably the one with the Broadway.

In 1963, Broadway Drive-In Theatre, Inc. lost a lawsuit against the US regarding taxes collected in 1955-57. The full decision, on Leagle, and the part I find most interesting is the list of corporation members:

Opened with “The man behind the gun” and “Sabre Jet”.

As JAlex’s comment indicated, the Broadway was planning to open with The Man Behind the Gun and Sabre Jet, but it didn’t actually open until a few days later when Return to Paradise and 99 River Street were booked.

Motion Picture Exhibitor, May 12, 1954: “ST. LOUIS – It will soon be free motion pictures nightly at the St. Louis City Workhouse for Warden Clarence Weismantel through the courtesy of Mayor Roy A. Parker, Brentwood, Mo., one of the owners of the new Skyline (sic) Drive-In, immediately south of the workhouse. The 700-car drive-in is to open soon. A big picture window in a bedroom on the second floor of the warden’s residence at the southeast corner of Broadway and Meramec Street has an unobstructed view of the drive-in screen. The bedroom is being converted into a den, and to help the warden enjoy the free shows, Mayor Parker has arranged to have an electric line and a drive-in speaker installed.”