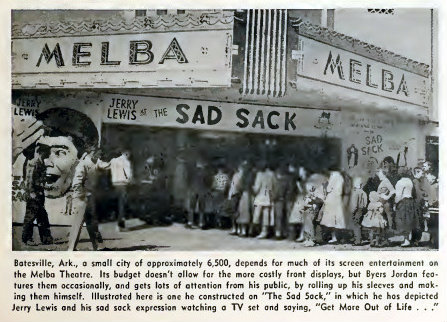 Built by 1923, the Melba Theater opened in 1940, a Streamline Moderne style movie house on Batesville’s Main Street. The theater features a large vertical sign flush to the facade and a triangular marquee, both spelling out the theater’s name in neon-lit letters.

Though the Melba Theater closed in the early-1990’s, it was renovated and reopened in 2000 and functioned both as a concert venue and movies on weekends. It has also been a host theater for the Ozark Foothills Film Festival. The Melba Theater is listed on the National Register of Historic Places.

Closed by 2016 for renovations and fundraising for a digital projector. It reopened in August 2016.

Small color photo on this link (don’t try to expand without a password:
View link

Here is an interesting article about the renovation of the Melba:
http://tinyurl.com/mnc2r

In the early 1950’s, I saw Tex Ritter and his band live on stage at the Melba. He sang songs he had made famous. The one most requested by the youngsters was “Rye Whiskey.” Before the show was over, he led his horse, White Flash, upon stage and had him do tricks, such as counting to ten and shaking his head yes or no to questions Tex asked him. Around 1958, a live magic show was held on stage at the Melba with audience participation. In 1956, the local radio station, KBTA, staged a talent show on the Melba stage every Saturday just before the matinee. The most popular attraction was always the owl show at midnight on Saturday nights which gave teens a good excuse to stay out late.

As I remember, the first CinemaScope film, “The Robe,” starring Richard Burton, played at the Landers, not the Melba, in 1953.

There was a photo of the Melba in Boxoffice, May 1958:
http://tinyurl.com/yemldz2

I remember seeing Disney’s The Rescuers there and Popeye as a kid in the late 70’s. It was pretty cool to take my kids there to see Schreck 2 around 2004

The part of this entry about the opera house is completely wrong. Adler’s Opera House was much further down the block, toward what was then Chestnut (now State). It’s still there, a very well preserved structure with an ‘A’ in the keystone above the central window.

The Melba building does seem to have begun as a store, but the building does not appear until the 1923 map, replacing some small wooden shops on the 1914 map.