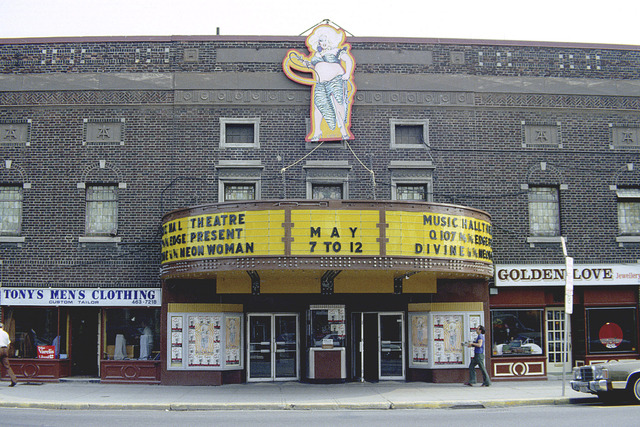 Originally opened as the Allen Theatre on August 18, 1919 with Madge Kennedy in “Through the Wrong Door”. It was later known as the Century Theatre and was remodeled in 1934 by the architectural firm Kaplan & Sprachman.

It last showed mostly second-run movies before its closing in February of 2004. It reopened in May of 2004 under the Festival chain but closed once again in August of 2004.

It re-opened in 2006 as the Danforth Music Hall Theatre.

The web page Eric Veillette linked to in his comment of Jan 23, 2011, has a scan of an ad for Allen theaters which includes an Allen’s Bloor. Does anybody know if that house is listed at Cinema Treasures under a different name? If it is, it’s missing the aka. I found an article about a Bloor Street Allen Theater in a 1919 trade journal, and I’d like to link to it on the appropriate Cinema Treasures page, if somebody can point me to it.

Allen’s Bloor is listed here – erroneously – on CT as the Midtown and currently serves as Lee’s Palace, a nightclub. It took me a little while to sort this out because there is erroneous information both on the Midtown page and elsewhere. In fact, the Midtown page should not be labeled Midtown, and this fact has been noted by other commentators, but the error has not been corrected.

What is now Lee’s Palace opened as Allen’s Bloor at 529 W. Bloor in 1919. Famous Players took over the Canadian assets of the Allen chain in 1923, so this theater was later the first Bloor Theatre. The current Bloor, across the street at 506, opened as the Madison and has had a number of names, including the Midtown, Capri, and Eden.

I see that the errors have been fixed. Tres bien.

Perfect. Now only if they would drop the Algoma theatre in Marie, ON which is actually the Algoma in SAULT STE MARIE Ontario and already has it’s own page on CT.

Saw a band last night at the Danforth Music Hall. It was great venue for that. They’ve removed the seats on the main level now, but, there are still seats in the balcony.