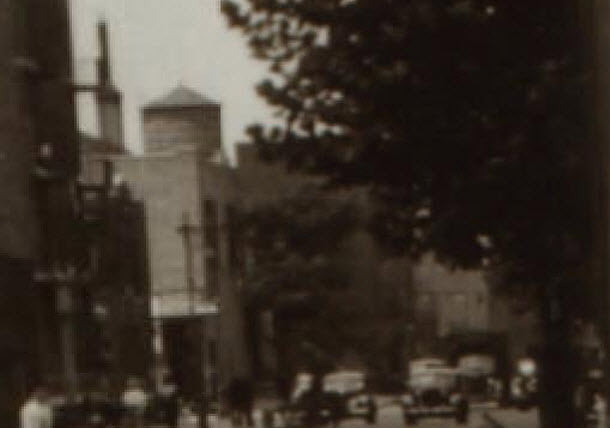 When I moved into the neighborhood in 1969, the building was still standing with the words “Miller Capitol Theatre inscribed on the outside about 2 stories up. By then, it had become a little grocery store owned by an elderly woman named Miss Fanny. After she died, the building was vacant, then taken over by The Afro Carting Co. After they went out of business, this building still stood, but during that time, the crack epidemic took hold passing that building became somewhat dangerous. Eventually, the building was razed & replaced by "affordable” 2-family housing. I’ll be uploading pictures for the site, both when they were building the new housing, as well as how it looks today.

gthe new building which is visible is on the opposite side of the street, across from where the Pacific St. entrance of the theatre would’ve been located, but by then been long bricked in. That entire building that you see across from the salon used to be an apartment building on the corner, several 3 family homes, a restaurant which was a fish & chips place, a liquor store & closest to Atlantic Avenue side, a store that sold knick-knacks & books. before that, the store sold used appliances. This would’ve been from the 60s through the 80s & early 90s. That building is kinda like a Home Depot, selling roofing supplies & the like. If you go to this link:

And use the zoom function & zoom all the way out to the top-right of the picture, you can see the Pacific St. entrance of The Miller Capitol Theatre.

What in the world happened to the formatting?

Since the link won’t take, simply go to digitalgallery.nypl.org and search for Brooklyn: Pacific Street – Hopkinson Avenue After doing so, use the zoom function & soom all the way in & at the top of the picture you’ll be able to see the Pacific St. entrance of The Miller Capitol Theatre on the corner of Saratoga Avenue.

Tinseltoes, Precious little information is found about the theatre &most of the people whom lived here back then have either moved away long ago, or have passed on. The only thing that I can find in reference to it is that it catered to a Negro audience. I have also been saying how I remembered seeing “Miller Capitol Theatre” being engraved on the building. While searching theatres, I found this link to the theatre which shows that in 1921, an organ was shipped to the MILLERCapitol Theatre.

I have a great memory & knew that I wasn’t imagining it. I’ll keep digging to see what more I can find out. By the way, I have a picture that has been blown up, taken from Pacific Street showing the entrance on Pacific Street & Saratoga Avenue, which is close to the view which appears above. It’s pretty blurred, but it’s the best that I can do for now.

In the mid 1900’s when I was Brooklyn theatre hopping, I indeed saw a facade saying Miller’s Capitol Theatre on it. It was boarded up but I didn’t see an the auditorium part of the building. The storefronts might have been there (all closed) but I can’t swear to that. The auditorium was razed, my picture doen’t show it and had been a large building (auditorium) as it shows in today’s upload. No marquee or vertical either. Just the lobby front was spared at that time. Bruce F. and myself saw it and he knew it was there.

@Orlando, I live right down the block from here. You wouldn’t & couldn’t have seen an auditorium because by 1969, the Dean Street entrance was a country store & in 1939, the entrance on Pacific & Saratoga was a store called Herkimer Dairy & by 1969, was an egg carton facility owned by my neighbor, Cliff Huins.

No lobby has ever been visible & no storefronts existed since at least the mid 60s. The entire building was taken over by Afro Carting in the mid 70s, which went out of business shortly after the crack epidemic hit the neighborhood in 1986.

The building was abandoned & the entire structure wasn’t razed until 2003. For years, it sat there as an eyesore & a somewhat dangerous one. I took pictures when they began construction of the new homes in March 2004. I’m looking at them as I write this.

I’m not sure what you were thinking of, but no auditorium existed since the 60s. In fact, if you check the pictures of the Yusef Hawkins funeral, you may catch a glimpse of the building as we’ve known it from the late 60s - beyond. By the 1980s, interior of this building looked nothing like the 1940s tax ID Photo. The interior had been converted to retail use & all of the storefronts had been bricked-in in the 1960s.

There should be 2 changes made to this listing.

By the late 60s, it was pretty nondescript & carving aside, showed no internal remnants of having ever been a movie theatre. It was just another old building that contained a store of Pacific, a store on Dean, becoming the equivalent of an indoor junkyard by the mid-70s.

To indicate the condition of the former Miller-Capitol Theatre in the 1980s, NYC didn’t bother to photograph any part of this building. In fact, the only image that I’ve ever seen online, was when the Daily News covered the funeral of Yusef Hawkins in 1989.

Somewhere, there’s a picture of police snipers on the rooftops diagonally across the street from the church. In that shot, you can see a bit of the Dean Street entrance of the Miller Capitol.

You also can see a very brief shot of it in the 2020 HBO documentary, “Yusef Hawkins: Storm Over Brooklyn”, which I’m uploading.

What’s the meaning of Fox Theatres (Reading, PA) in the “Previously operated by” information? Doesn’t make any more sense than listing this as the Miller-Capitol, which probably was its original name, Miller signifying the ownership at the time. But as this website, theatres are usually listed with the name last used, and that seems to be Randforce Capitol, or just Capitol. Randforce was a penny-pinching circuit that didn’t spend much or anything on putting its name on marquees and/or verticals. I doubt if you will even find individual ads for the Capitol Theatre, nothing more than listings in newspaper directories.