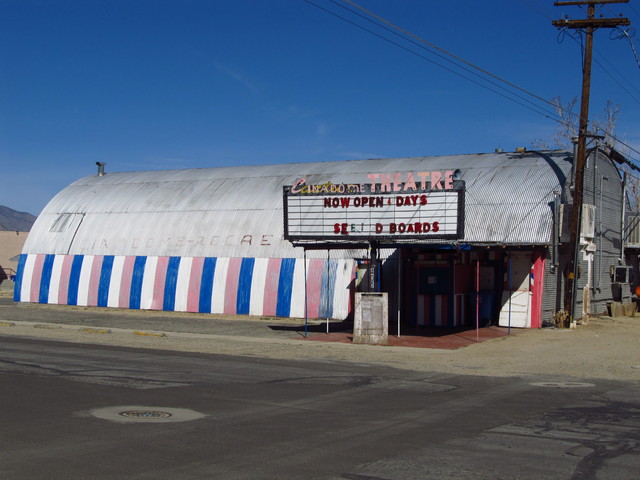 The Cactus Theatre opened in the late-1940’s, a Quonset-hut style movie house that could seat just over 300. Mainly a second-run house for much of its life, the Cactus Theatre did show action, kung-fu and “blaxploitation” films during the 1970’s.

One of its most successful screenings ever was in 1972 when it became only the second theatre in Nevada to show the pornographic hit, “Deep Throat”. Towards the end, ironically, the Cactus Theatre played a lot of Disney fare. It closed in 1997. The theare reopened again, as the Cinadome Theatre, but was closed in 2012.

It looks like somebody either reopened it or tried to as the ‘Cinadome’ (sp). I can’t say it looks like they tried too hard.

Drove through town last week and I’m happy to report that this theater has reopened. On weekends, they are showing second-run triple bills. I saw a late show of “Sin City” before checking into a local hotel for the night. Not sure how long the late shows will continue, though; for a long time after the announced 10:30 showtime, I was the only one there, and the operator said he couldn’t run it unless at least a couple more people showed up; eventually, around 11, a couple of kids did, and the show went on. I assume they did better earlier in the evening with “Star Wars.” Anyway, there’s not a heck of a lot else to do in this military town but drink and gamble, so I’m happy the community has this back and hope they support it.

Here is part of an article from the Reno Evening Gazette dated 8/30/57:

HAWTHORNE â€" Mrs. Elizabeth Bearden, owner of the Cactus and Desert theaters in Hawthorne, recently purchased the Mineralite Drive-In Theater and the lease on the Babbitt Theater and will assume active management of these two theaters on Sept 1.

The sale was made by Charles Leonard who has operated the Babbitt theater since 1949 and who constructed the Mineralite Drive-In, Hawthorne’s only drive-in theater, in 1953. Mrs. Bearden has announced that her Desert theater will be closed on Sept 1 and that the Babbitt theater, which has been closed during the summer months, will re-open on Sunday, Sept 1.

Anyone know where in town the Mineralite Drive-in was? I assume there are no traces left, but in an area that unpopulated, you never know.

I know. No address listed on that page, though.

Looking at the pictures you gotta be kidding Me!

Its different alright,I kind of like it,not a movie palace though.

This is closed now.