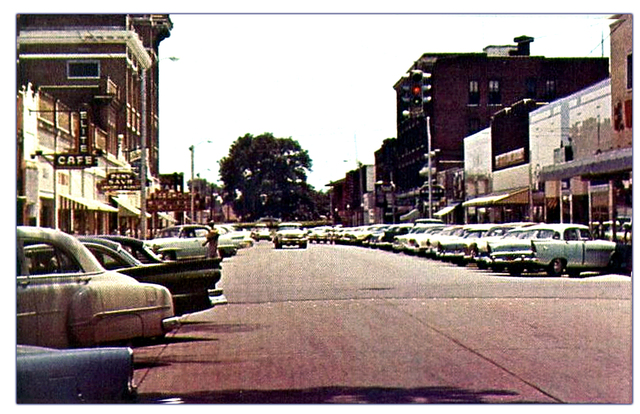 The Marion Theatre opened in 1918 on Yazoo Avenue in Clarksdale. The theatre was designed by John Gaisford and one of the first theatres in the area to be built mainly for showing movies. By 1931, the Marion Theatre was acquired by the Saenger Amusements chain, which renamed the theatre the Paramount Theatre. It continued to operate as a movie house for over three more decades.

By the time it closed on October 28, 1976, it had been twinned. In 1986, the Paramount Theatre was taken over by a group that used the theatre for performing arts, and was renamed the Larry Thompson Center for the Performing Arts. The theatre seems to have been used on and off since the 1990’s and is currently closed.

From the late 1950s a photo postcard image of Yazoo Street along with the Paramount in Clarksdale.

The April 15, 1922, issue of The American Contractor carried a notice saying that Memphis architect R. B. Spencer was preparing plans for the rebuilding of a burned theater for the Marion Theater Company at Clarksdale, Mississippi. The project was to cost $75,000.

Street view is wrong, because the address is wrong (maybe 258?). Theater is at the other end of the block, and the old Paramount marquee is visible (as of 2013 at least) after being covered by a sheet metal shroud for years.

Looking at the back of the Paramount in the street view from 3rd Street, it’s possible to see that a corner of the parapet wall of the auditorium has collapsed. Checking the Internet, I found that part of the roof collapsed almost five years ago, and the interior damage to the auditorium is shown in this photo from the January 3, 2013, issue of the Clarksdale Press Register.

The caption says that a local developer was acquiring the building and intended to have it open by the end of the year, but I can’t find anything more recent about the project so I would assume it remains unaccomplished. But neither is there anything about a demolition of the building, so I’d assume it’s still standing, if only barely.

Judging from street and satellite views, the Paramount has a large stage house— no wider than the auditorium, but surprisingly deep. It could be a good venue for live events. However, Clarksdale is not a large or prosperous city. The 2010 census gave it a population of 17,962, and the estimate of the population in 2016 was only 16,272.

A shrinking city with a straitened economy is unlikely to be able to manage the restoration of a large theater on its own, let alone support its use with solely local custom. In the absence of an outside angel coming to the rescue, with both funds and a plan to mount shows that would attract patrons from far and wide, the future does not look bright for the Paramount.

Comparing the pictures I took in 2010, you can see that a lot of the windows have been replaced in the McWilliams building (taller structure on the right side). Hopefully work will continue. Seems a lot of new restaurants, etc. have opened since I was there. I did notice that some of the wall had crumbled, and I’m surprised at how much damage it caused.

I didn’t knew this site but came across you trying to find out the history of the place I’d seen on a recent trip.

Thank you for the info! I’ve added a recent pic I took. It was late and I just shot it from the car hand-held, I wish I had stopped for more pics