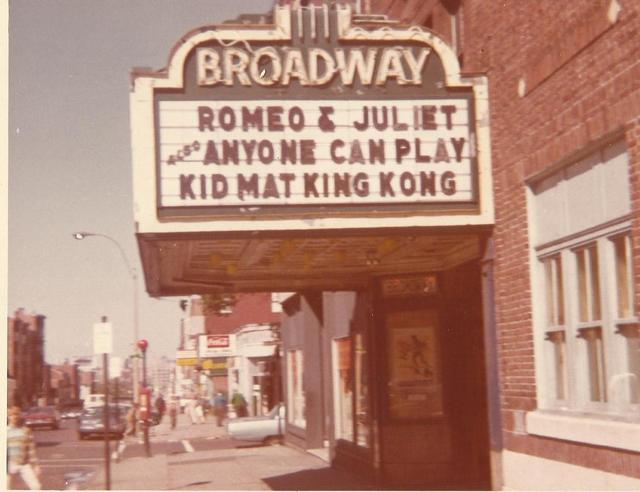 Opened in 1920, the Broadway Theater was designed by architects Clarence H. Blackall, Clapp and Whittemore. Following a fire, it was rebuilt to the designs of architect Clarence Kivett in 1938.

I went to the Google Street View as per Phantom Screen’s experience above. Very interesting how it takes you around back to Athens Street. The stage house appears to be down at the left end of the building, with rows of little dressing room windows on the second, third, fourth floor; a scene loading door below on the street, and various plywooded exit doors. If you look at 424 Broadway, you can see the front, but you have to know what to look for. It probably is a mess inside; the plan was to renovate it and turn it into condos.

With all the beautiful restoration work on the Strand Theater in Uphams Corner, as well as the Paramount, Opera House, and soon Modern downtown, it wound be a pleasure to see the same with the Broadway. I wonder how a 1777 seat movie house can be left abandoned and in ruin. It would be nice to finally find out its future, if there is one.

I also wonder what’s going on with this property. The Broadway has been closed up for a very long time now. But, stevecimm, don’t expect to see “beautiful restoration” work at the Modern Theatre downtown- it has been totally demolished except for its facade which is now being re-erected in front of the new building on site.

Thanks for the update on the Modern, Ron. I had a feeling something was amiss. At least we have the other three gems.

There is an Olympia Theatre listed under “Theatres” in the Boston Register and Business Directory, Issue 83, 1918; and in the same directory, Issue 85, 1921. The address is 429 West Broadway. That would put it across the street from the Broadway Theatre. I don’t know anything about the Olympia.

The Broadway Theatre is listed in the 1921 edition of the Boston Register and Business Directory, Issue 85, at 420 West Broadway in South Boston. Across the street at 429 W. B'way was the Olympia Theatre. A near intersection was with F Street.

Here is a brief article from the October 18, 1919, issue of the weekly journal The Music Trades:

“George Lincoln Parker, the Boylston Street piano merchant and resident representative of the American Photoplayer Co., succeeded a few days ago in securing an important contract, after the keenest competition for an organ to be installed in the city’s latest, largest and most attractive moving picture house.

“The Robert Morton Symphonic organ, as constructed by the American Photoplayer Company, at its modernly appointed factory in Berkely, Cal., will grace the Powers Broadway Theatre, South Boston, on or about February 1, 1920. This picture playhouse is at present in process of construction and the same contractor who delivered Camp Devens in Ayer, Mass., to the government will spare neither time nor money to have the theatre complete on contract time.

“The Robert Morton Symphonic organ both in tone and construction will feature the interior’s furnishings where music lovers and theatre goers are promised a revelation when the organ is heard amidst the costliest and most artistic theatre appointments. The organ, when completed and installed, will be the best and most expensive instrument ever installed in the city’s long list of theaters.”Photos and floor plans of the Broadway Theatre were published in the June 8, 1921, issue of The American Architect, which can be seen online here. Scroll down to see additional photos. They can be resized using the + and – signs in the toolbar at lower right, and individual pages of the size you’ve chosen can then be downloaded with the usual right click-save commands.

From the 2013 google aeriel and street vews, the condition looks pretty dire; the roof over the auditorium and stage is shot, must be leaking a lot. The new street views do not have the sunlight this time around. From the Athens side it looks like a number of windows along the auditorium sidewall. Was the space gutted and turned into office space at one point?

After at least 35 years of disuse, this theatre will soon be demolished and replaced with a 42-unit condo building. The facade and lobby will remain.