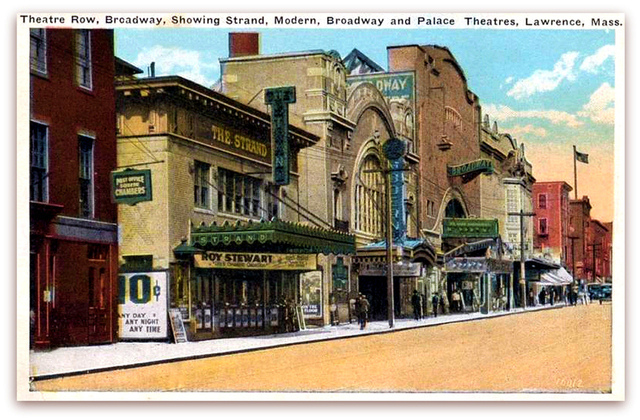 The Palace Theater opened in 1921 and was designed by architects Clarence H. Blackall, Clapp and Whittemore. The seating capacity quoted comes from the architects plans as published in “The Architectural Forum” magazine of June 1925.

palermo- you can try the Theatre Historical Society; they have a huge archive in IL. Their website is historictheatres.org; their e-mail address is there. It’s fairly easy to find exterior photos, but interior photos and floor plans are much more difficult. They charge a fee for copies of their stuff.

I agree…..it’s fairly easy to find exterior photos, but interior/floor plans are much more difficult…don’t know why that is!?!

Thanks for your help. I did send an e-mail to Historictheatres. I guess I’ll just wait and see what they can do for me. Thanks again.

I’ve been a theater buff since I was a kid. As a native of Lowell, Mass., I prevailed upon any family member I could to take me to theaters in cities outside of Lowell. Lawrence, a smaller city than Lowell, was closest, and, so I did visit the Palace and the Warner when they were still running. The Palace was a theater one would expect to find in Boston…it was unusually fine for a city the size of Lawrence. It was bigger, more complicated, and more elaborate than anything we had in Lowell, or anthing else around. I rember it had a spacious lobby and a beautiful auditorium. Lawrence, like its sister city Lowell, failed to hang onto any vestige of its historic theaters. What a shame!

I remember going to the Palace as a kid. We used to stand in line outside in front waiting to get in and I remember seeing the stills to James Bond’s Dr No and Goldfinger in the poster displays. Louis Pearls was where we all bought our popcorn and if I remember correctly remained there for sometime long after the the thearerst were shut up. I saw a lot of the Disney films there like “Flubber” and “Son of Flubber” and remember having to go in to pull my sister out of “A Hard Days Night.” I remember also going there for some event where Major Mudd (a local television celebrity) made a special appearance. The last thing I saw there was a double feature of “It!” starring Roddy McDowell and “The Frozen Dead” in 1967.

I should also add that Fred Demara’s (The Great imposter) dad was a Union projectionist in the the palace and other Lawrence theaters. I never knew him or his dad but was told by the guys that trained me that he/they lived on State St. in Lawrence. Wikipedia said that his uncle Napoleon Louis Demara owned theaters there.

I’ve got more than a few pictures now courtesy of the Lawrence Public Library and the Immigrant City Archives of Theater Row in addition to some pix of the current location put up here now.
[url]http://www.pbase.com/jroy/theaterrow[/url]

I’m still working on some of the other individual ones in the city.

The Palace is listed in the 1927 Film Daily Yearbook as having 1,980 seats, open daily.