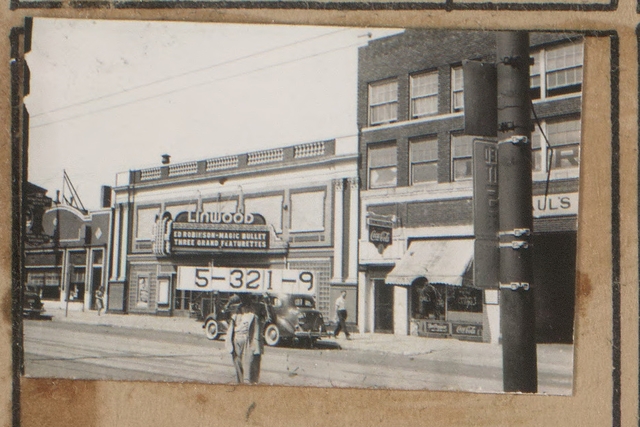 One of the many neighborhood theatres located along Prospect Avenue in Kansas City. It was just five blocks north of the Emerald Theatre. The Linwood Theatre opened December 16, 1915. It was remodeled in 1922 and closed in the late-1960’s. It seated 796.

There is a public library at 3050 Prospect, then a parking lot, then a newer building around where 3036 would be. Closer to 3020 is an older building, but it looks a little small to hold 800 people. I can’t confirm that the theater is demolished, but if I find anything else I will pass it on.

Here is a link to a book describing the theater.

Here is a hyperlink to the article RobbKCity mentioned in the previous comment. It is from the March 11, 1916, issue of The Moving Picture World. There are small photos of the facade and the auditorium. The article doesn’t give an exact opening date, but implies that the Linwood had opened not too long before the article was published.

None of the buildings on this block now resemble the Linwood Theatre building in the 1916 MPW photo. I’m quite sure the theater has been demolished.

Carl Boller architected the Linwood Theatre built in 1910 for Jos. B. Fischer, C. Lloyd Hinshaw, and Elroy R. Parker. The lineage of the theatre actually dates back to the latter two owners' Linwood Garden open air theater two blocks away. Deciding to go year-round, the trio hired Stevens Construction who was the general contractor with brickwork by J.J. Hoffman, steelwork by Kansas City Construction Steel Co. and concrete by Gilsonite Construction at a cost of $25,000.

In 1922, the inexpensive neighborhood house was completely gutted leaving just the walls and a new $75,000 upgrade. It included a Wurlitzer Hope-Jones Unit Orchestra organ and all new seating layout. Capitol Enterprises Circuit built the new theater with 1,400 seats hiring W.O. Lenhart as its first manager.

This opened on December 16th, 1915. Grand opening ad in the photo section.