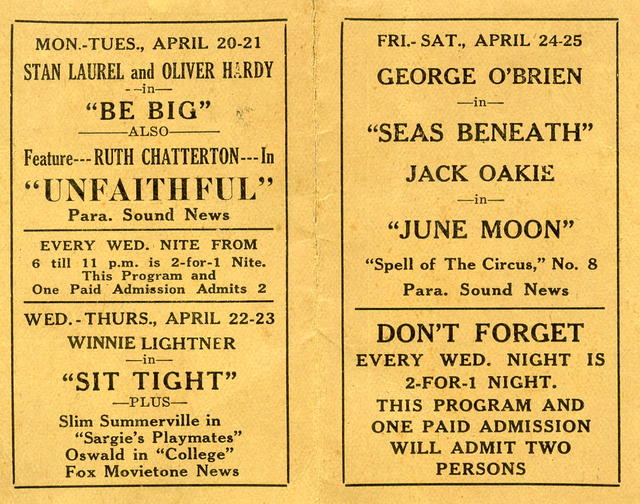 Would love to see a photo of this one!

The Captiol might have been located at 202 N. Evers Street. I’ve found articles saying it was threatened with demolition in 1996, but was renovated in either 2003 or 2006. The building in question doesn’t really resemble a theater from the outside, but that makes sense if it only operated on one floor.

According to the book Remembering Plant City, by Gilbert Gott, the Capitol was in the Young and Moody Building, which is on the northeast corner of W. Reynolds and N. Evers Streets. Gott says that the theater was on Reynolds Street, and opened in 1924.

Judging from the configuration of the building, the auditorium must have occupied the back half of the square structure, with the screen end along Evers Street where the second-floor wall is still blank brick, while the rest of that facade has fenestration. The theater entrance must have been at the east end of the Reynolds Street side of the building, farthest from the street corner, at about 110 W. Reynolds. Here is a recent photo of the Young and Moody Building.

CinemaTour has several photos of the Capitol Theatre, and gives the opening date as March 6, 1924.

However, I don’t know what to make of an item, datelined Plant City, from the “New Theaters” section of the February 16, 1927, issue of The Film Daily, which says: “Work has started on Universal’s new Capitol to cost $50,000.” Did the magazine give the wrong name for a different theater project, or was the Capitol actually built in 1927, or did Universal spend $50,000 to upgrade a three-year-old theater? CinemaTour doesn’t cite a period source for the 1924 opening date, so we can’t double check to see if there was some mistake there.

There is an interior photo of the theatre in American Theatres of Today Volume One page 83.