History Museum on the Square (Official) 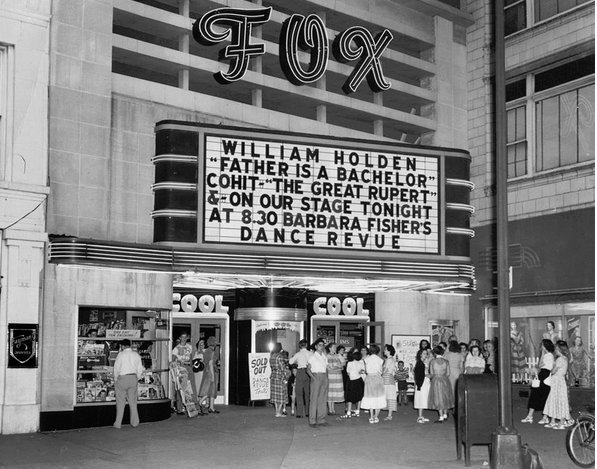 Located in downtown Springfield and opened in 1916. It was originally known as the Electric Theatre with 1,800 seats and was designed by the Boller Bros. architectural firm. Interior decorations were by Kansas City based interior decorator G.T. Noel in a Renaissance style and local Springfield artist Oliver J. Corbett provided decorative paintings. Vaudeville acts were booked through the Pantages circuit and suplemented the movie program. The Electric Theatre was taken over by Paramount Pictures Inc. in 1930 and renamed Paramount Theatre. They sold it to Fox Theatres in 1934 and it reverted back to the Electric Theatre name. In early-December 1942 the Electric Theatre was badly damaged by a fire. It took several years to renovate and it reopened as the Fox Theatre on June 23, 1949 with Hedy Lamarr in “Let’s Live a Little”. It closed in 1982 and afterward became home to a church who moved out in 2014.

Again, a small correction. The Fox was still showing movies when I worked for Dickinson Theatres, the last theatre owners before it became a church, up til about 1982. It was last operated as a “Dollar” house by Dickinson. The last movie I went to there was “The Rocky Horror Picture Show” at a midnite show in 1981.

The theater was originally called the Electric Theater. It caught fire and was reopened as the Fox theater after repairs. It was owned by Mann theaters before it was Dickinson. I worked there from 1980 until 1982. One of the last first run movies we played was “The Fox and the Hound”. It was the only movie where we opened the balcony and actually filled the auditorium to over 1,000 customers. There was a large mural painted in the hallway leading into the auditorium that depicted the history of Springfield.

Worked here too. God that hideously Green and White color scheme thruout the theatre??????? And — I don’t think there was a square wall in that lobby at all. I’ll never forget the day I threw out 20 years of press material that George Hunter had saved. OMG! Tyndall Lewis almost kicked my butt up between my ears LOL.

Other pictures of the Fox Theatre, when it was the Electric, can be found at:

I worked at the old Fox all through high school , right up until it closed . We had such fun showing the midnight movies on weekends and the summer parks program movies matinees for kids . The Rocky Horror Picture Show and Pink Floyd The Wall were always a trip !

I transferred to Springfield, Mo from KCMO to manage the Fox Theatre in 1974. It was a Mann Theatre. I was 21 years old. Very fun times. Someone mentioned Tyndall Lewis. “Lewis” was manager of the Gillioz Theatre and a great friend of mine. When I managed the Fox, it showed mostly Disney type films. One film I remember was Herbie Rides Again (1974). We had a real Volkswagon with Herbie decals parked on the sidewalk in front of the theatre. It had a microphone and speaker so we (the car) could talk to people walking by. I was told that in the Fox basement, artists used to paint all the theatre posters for almost all Springfield theatres.

The Fox may have been restored if I am reading this website correctly.

When Abundant Life Church left the Fox, it was purchased by the Springfield History Museum, which plans to renovate the theater. It will be used for film screenings, live performances, etc. when renovation is complete. It is currently open and being used to house the museum’s exhibits.